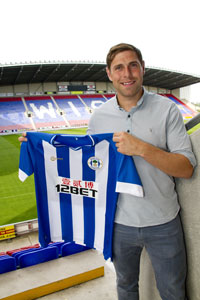 Holt leaves Carrow Road after four successful seasons with the club which has seen them achieve back to back promotions and then retain their top flight status.

The Carlisle born striker joined Norwich on July 24th 2009 from Shrewsbury Town for a fee of £400,000 after he had finished the previous campaign as League Two’s top marksman with 20 goals from 43 league starts.

He also hit the target a further 8 times in 8 outings in cup competition for The Shrews with 5 of those coming at Adams Park in a 7-0 demolition of Wycombe Wanderers in the Johnstone’s Paint Trophy.

Just a week after joining Norwich Holt was in action at Carrow Road as his new side beat Wigan Athletic 3-2 in a pre-season friendly.

Norwich had just suffered relegation from the Championship and the following weekend didn’t bode well for a quick return as they went down heavily at home against Colchester United on the season’s opening day with their local rivals running away 7-1 winners.

However Grant Holt inspired them to automatic promotion as champions, finishing 9 points clear of Leeds in second, with 24 goals from 39 league starts which earned him his first of three successive Player of the Year crowns.

The following season was equally as successful for both Holt and the club with the striker adding a further 21 goals to his account from 45 league outings as City were once again promoted, this time as runners up to QPR.

Holt had now rose from the fourth to the top tier in successive seasons and his first Premier League outing came on the opening day of the 2011-2012 season in a 1-1 draw against Wigan at the DW Stadium.

He finished that campaign with 15 league goals from 36 appearances (12 from the bench) in his maiden season in the Premier League, the second highest English goalscorer in the top division behind only Wayne Rooney in the rankings.

Last year was a bit of a lean one by Holt’s standards with only 8 goals from 34 outings but despite that he was again the club’s leading goalscorer and one can’t take anything away from his more than impressive CV at Carrow Road with 78 goals from just 4 seasons.

Speaking about his latest recruit manager Owen Coyle said: “This is a fantastic piece of business for us at a really good price. Grant is a proven goal-scorer at every level and he will definitely bring something new to the table that we were missing in the squad.

“There is already a great buzz about the place since the new boys have started coming through the door and this is another one that will really lift the place.

“He’s been a hero to the fans at every club he’s been and I know the Norwich fans are sad to see him go, he’s been one of the icons of their success in recent years. But now it’s the Wigan fans’ turn to enjoy him and we’re all delighted he’s coming on board.”

Holt began his footballing life with non-league Workington Town, and only began playing league football in 2003 when he joined Sheffield Wednesday from Barrow.

His path to the DW also took in Rochdale, Nottingham Forest, Blackpool and Shrewsbury before signing for Norwich.

Holt has immediately been handed the number nine shirt, the same number that he wore during his time with Norwich.