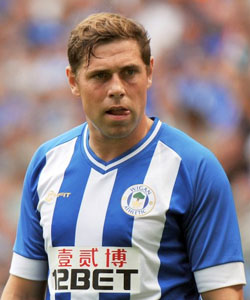 Aston Villa have agreed a deal to take striker Grant Holt on loan for the remainder of the season.

In an interview with Sky Sports News Wigan manager Uwe Rosler confirmed the move commenting: “There is a great opportunity for him to work under his previous manager, who got the best out of him.”

“Both parties had worked well together. It was too good a chance for Grant to turn down.

“We wish him all the best but he is our player and we will see where we are over the summer.”

Paul Lambert is no stranger to Holt as the Wigan front man joined Norwich City from Shrewsbury Town just a matter of weeks before the Scot was appointed as manager at Carrow Road.

Lambert guided Norwich to consecutive promotions taking them back to Premier League with Holt scoring 46 goals in total over that two-year period and then scoring another 15 goals in their first season back in the top flight.

Lambert left Norwich to fill the hole left by Alex McLeish at Villa Park in the summer of 2012 with Holt also heading North to Wigan 12 months later.

Speaking after yesterday evening’s 2-1 home defeat to Arsenal Lambert spoke on the subject of Holt saying: “I know Grant from my Norwich days, he was absolutely brilliant for us. It’s a couple of years later down the line, so we’ll see”

Aston Villa have been struggling to hit the target of late with last night’s Benteke goal against Arsenal only their fourth in the Premier League since the beginning of December – a run of seven games.

Mind you Holt hasn’t been particularly prolific since his £2 million summer move to the DW with only one further goal to his credit, and that coming from the penalty spot, since marking his debut on the opening day of the season with Wigan’s second against Barnsley.