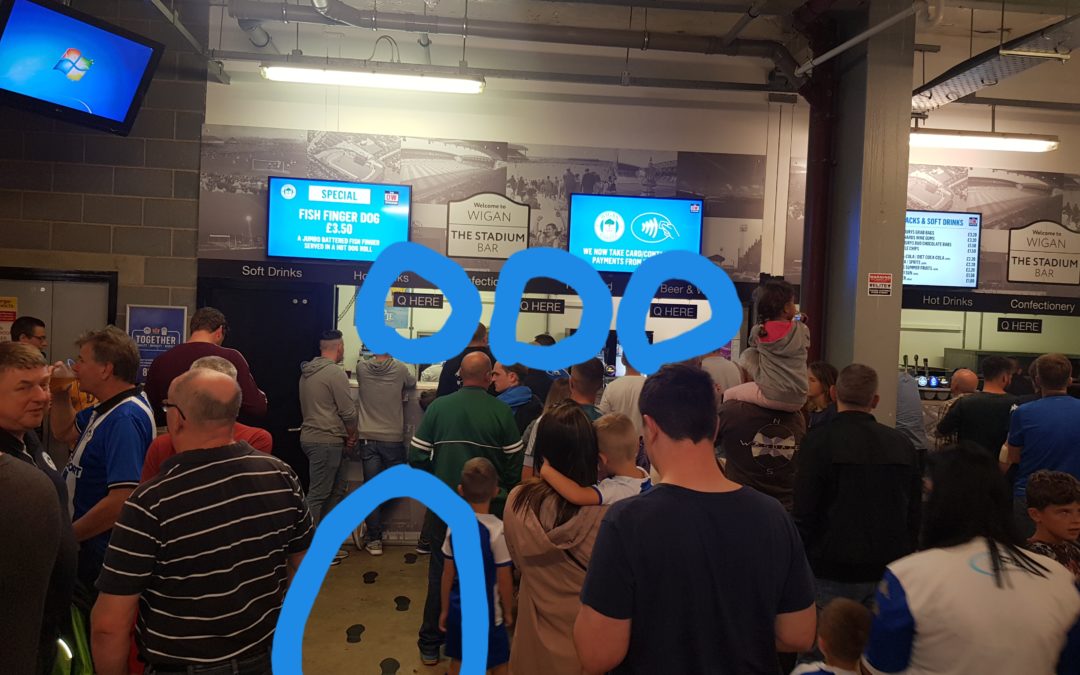 A lot has been going at the Stadium over the summer and most of it has made the match day experience better and believe it or not cheaper.

I will come to the pricing on beer later, as you can now get a pint in the stadium for £3 if you know where to go.

I firstly want to get a message across on behalf of Wigan Athletic SLO Jason Taylor, who has been in touch to let us know of some complaints he had from the first couple of games.

Service has been a talking point for what seems to be forever, but Centerplate have put more staff on the kiosks, provided pop up stalls and even created foolproof markings for queuing.

Well you would think they were foolproof, until Jason was taken with one of the complaintees, on to the concourse during a game. What they saw were people standing in two queues at each kiosk, even though there are three ‘Q here’ signs and three sets of feet on the floor to show people where to stand.

Amazingly, the rugby fans grasped this straight away, but we seem to be finding it difficult. So when you are on the concourses for the Rotherham game, please look up at the kiosks, and down at your feet for guidance.

Whilst you are at the kiosk, have a look at the new food offerings they have too…. I don’t want to spoil anything as it nice for surprises, but at the Nottingham Forest game I had the Chilli and Wedges, WOW…. very nice.

Anyway, the £3 a pint beer prices. That is something that we stumbled across also at the Forest game. We went into the Supporters Bar in the South Stand for the game to see if anything had changed.

Well it has, members get so many exclusive drinks prices it is amazing. Fosters and Bitter is £3 a pint. Dark fruit Cider is £3.50 and you can get a pie and a pint for a £5er.

Don’t get me wrong, it is £6 for a membership for a season but at last you get benefits in the bar. Saving 80p a pint means we save the price of membership in two games. See www.wiganathleticsupportersclub.co.uk/

If you are hungry, there is much more than pies on offer in the Supporters Bar too. All in all, the match day looks to be getting much better.

*Totally made that bit up, but it must be something like that!!!!