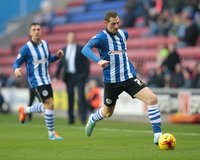 An early Jonny Howson goal was enough to earn Norwich City all 3 points in a relatively scrappy game at the DW Stadium, Howson was allowed the time and space to set himself to drive home the early opener against a lacklustre Wigan Athletic side.

Cameron Jerome could have doubled the Canaries lead just minutes later but failed to capitalise on the opportunity.

In relatively poor form, both teams were looking for the crucial opening goal to a vital victory and it was Norwich who broke the deadlock.

A long punt up field from John Ruddy was controlled by Gary Hooper who with a simple lay-off got the ball to Jonny Howson who wasn’t picked up and was able to drive low straight past Scott Carson just 5 minutes into the game. Jerome could have sealed a nightmare start for Malky Mackay’s men as another long ball (which proved problematic all afternoon) got the better of Maynor Figueroa allowing Jerome to focus in on goal but the former Stoke man’s effort was tame which was easily held by Carson.

Wigan took their turn at the direct style play with Marc Antoine Fortune the focal point. Maynor Figueroa pumped the ball up to the former Baggies’ man who surrounded by yellow shirts managed to control the ball, turn past Carlos Cuéllar and Steven Whittaker only to fire straight at John Ruddy. Callum McManaman went close to squaring the game up after some link up play with Fortune brought the FA Cup Final Man of the Match some space to wrap his left foot round the ball but unfortunately whistle past the far post. James Perch continued the pressure from the hosts going close with a glancing header from James McClean’s free-kick.

Probably the most entertaining action of the game came down near ES2 midway through the second half. A straight footrace between Figueroa and Norwich winger Josh Murphy saw the Honduran use his superior size and presence to take the ball, Murphy and assistant referee Michael D’Aguilar out of play. D’Aguilar subject to cheers from ES2 got up very bravely to signal a Norwich throw but realised the extent of shock that is caused when Maynor Figueroa comes baralling into you.

Back to the action where Fortune once again was proving tricky to handle when he scampered after an Andy Taylor ball down the left side. After seemingly losing the chance, he managed to drill a dangerous ball to the near post which Ruddy wasn’t able to grasp hold of allowing James McClean to cause some problems inside the area but despite the pressure from the Irishman, Norwich were able to scramble clear. Wigan survived a half hearted penalty shout from Norwich when Kyle Lafferty got the better of the Hull man who was always on a losing battle with the big Norwich man, Figueroa collapsed to the ground and seemingly took Lafferty with him but despite the handicap, the former Rangers man got a shot off which was deflected away by Carson.

There was no way through for Wigan as Oliver Langford blew for full-time. Consummating Wigan to 7 home games without a win and 3 points adrift from safety. Malky Mackay and his team face a difficult trip to Vicarage Road next week to face a Watford side coming off the back of a 5-0 win at Craven Cottage on Friday night.