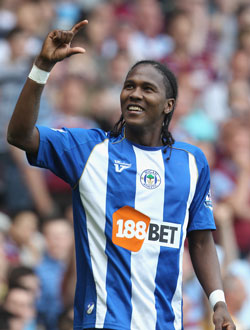 After all the speculation over the last eighteen months as to which BIG Club Wigan Athletic’s Columbian striker Hugo Rodallega was going to move to, our wait has finally ended, he’s going to Fulham.

It was only six months ago that Hugo’s agent was touting names like Chelsea, Arsenal, AC Milan and Ajax being after his ‘sought after’ player. He was advised not to sign an extension to his existing contract at Latics as he would move on to bigger and better things in the summer. Not everything panned out the way he thought it would though and at the Players Awards night he even told Cockney Latic that he was trying to sort out a deal to stay on at Wigan.

Since the turn of the year, he made very few starts and scored no goals besides having plenty of chances (he has scored only two goals from the 23 games he has played this season). After dropping him after March 11th, Latics went on a tremendous run and showed that the adage of ‘no player is bigger than the club’ rung true.

He leaves Wigan on a free transfer having played no part in the final nine games that saw Wigan pick up 21 points (except for a cameo in the final game against Wolves) and seeing his last ditch effort to stay evaporate because of wage demands.

So Hugo now heads off to London after a playing 117 games for Latics and scoring 24 goals, he has a times been a frustrating player but has also showed some tremendous from. I feel he may go the way of many ex-Latic players that leave for better prospects, only for them to wish they had signed that extension.

“I am delighted that Hugo has decided to join Fulham,” Martin Jol said. “There has been a lot of interest in him from other top-flight teams in England and abroad, so to be able to add his quality to our squad is a massive boost this early in our preparations for the new campaign. He’s a great addition and I think he’ll contribute very well to our style and philosophy.”

For the record, the only teams to show an interest were Everton and well Everton, who allegedly baulked at the £70,000 a week wage demands. With exit of Andrew Jonson and loanee Pogrebnyak (who chose to sign for Reading instead of the Cottagers) Rodallega could well make quite a few starts next term.