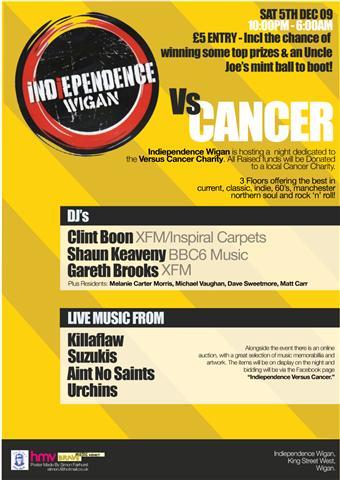 This weekned sees a massive charity event in Wigan town centre involving some excellent bands. Details are below and your support would be greatly appreciated.

Months of planning and hard work culminate this Saturday (5th December) at Indiependence Wigan (formerley Number15’s) with what is set to be the town’s biggest and best night of the year.

The event will raise funds for local Cancer Charites. A cram packed line up over three floors is set to entertain and delight in aid of a great cause. Organiser and Indiependence DJ Melanie Morris will be joined by fellow residents Matt Carr, Mike Vaughan and Dave Sweetmore on a bill that will also include some of the North West’s best live bands and a trio of nationally , no , internationally known guest DJ’s.

Madchester Legend Clint Boon (Inspiral Carpets and XFM) takes time out from his regular night in South (Manchester) to start proceedings with bands taking stage from 11pm on the top floor. Brit Pop-inspired Wiganers “Ain’t No Saints” and Indie/SKA Merseysiders , “Urchins” (If Johnny Marr likes ’em they’re good enough for us) take the first two slots , followed by popular local indie hardhitters “The Suzukis” , now settled with Record label Deltasonic, also home to releases by “The Coral” , “The Zutons” and “The Rascals”.

Headliners “Killaflaw”complete the bill, a Liverpool Dance Rock two-piece , picking up national acclaim and described as “The link between Led Zeppelin and The Prodigy”.

XFM Manchesters’ Gareth Brooks takes over floor filling duties on the top floor , whilst 1st and 2nd floor ears shall be filled with the sounds of BBC6 Music Breakfast Show DJ Shaun Keaveny. Shaun promises ,” not just bloody indie music though i will be giving it a bit of a “wigan pier indie night” feel in parts. I hope to throw up some soul, funk, beefheartian craziness, bits of hippady hop…” Do not , whatever you do request Robbie Williams ,you’ve been warned.

Five Great British pounds has never seen such value and will get entry to all 3 Floors, a prize ticket on entry and an “Uncle Joes” (whilst stocks available). As well as all this , signed memoribilia from The Smiths, Killers, Faith No More, Lilly Allen and more are on sale to the highest bidder.

Doors open at 10pm and what is usually a busy night anyway is set to get packed, so get there early.