Is there is something fishy going on at the FA???? 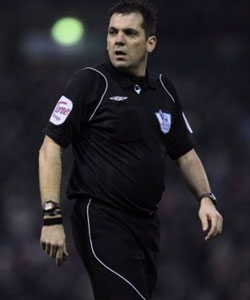 As the world saw on Saturday, referees can get decisions very wrong and Phil Dowd must have been cringing when he saw the replays of what he sent Conor Sammon off for at Old Trafford. But will little Wigan Athletic get justice?

Latics fans once again saw a disastrous referring decision screw up any chance we had of getting anything out of our game against Manchester United on Saturday and this time the whole world saw it.

The only person in the ground who thought that Conor Sammon’s tussle with Michael Carrick was a sending off was Phil Dowd who motioned that the Latics striker threw his arm/elbow back into the United defender’s face.

What actually happened was the players were both just jockeying for position and minimal if any contact was made in the region of anybody’s face. In fact the exact same thing happened at the other end of the pitch just a couple of minutes later, yet Mr. Dowd allowed Berbatov to back into Alcaraz and bang home a goal.

Double standards, you bet, these incidents were near enough carbon copy yet the Little Wigan player was made to walk, the Big United player was allowed to score the first of his two very dubious goals.

I’ll leave it to the match report for the non-penalty injustice, but we now look to the FA who will decide whether or not Conor Sammon should have his card rescinded. There seems no doubt in the footballing world what should happen, but unfortunately the footballing worlds and the FA are sometimes galaxies apart and this decision will either be a bad mark for the referee or will open up a huge can of worms.

The last thing the hierarchy want is for the press to have a field day with the one rule for the big clubs another for the rest. You only have to look at a proper elbow in the face to see the injustice here; Rooney attack on McCarthy at the DW Stadium last season was disgusting, but no punishment.

In the evening kick off yesterday we saw a Norwich defender lead by the arm to wipe out a Spurs player, again there was no punishment. So what the FA do in this situation will be massive, it won’t help our goal difference or let us see what would have happened had it been 11 v 11, but it will go a long way in showing the true colours of the people that govern our sport.

Let’s hope that justice prevails and the only thing fishy at the FA today is Sammon’s case.