Latics Fans asked to pull together 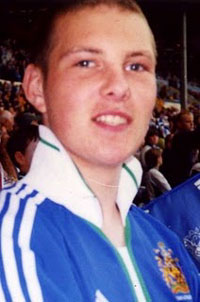 As Wigan Athletic fans we sometimes have to put issues of the club we all support to one side, to pull together to help out a fellow fan. A couple of years ago a through and through Latics fan had a car accident that would leave him brain damaged and in need of care and equipment.

In 2007 Anthony Ramsdale, a diehard Latics fan, was in a near fatal car accident that left him in fear for his life and in a coma for quite a while. When he emerged for the coma he was diagnosed with severe brain damage and would require 24 hour care.

On top of this care his father Bernard Ramsdale who is the creator of the Ye Old Tree and Crown Latics fanzine web site, was told that Anthony would also need specialist equipment and was asked to find £4,000 for a specially designed armchair.

As a community, all of the major Wigan Athletic groups are coming together to help to raise the money to pay for the new chair.

A series of charity events are to be organised and Cockney Latic is asking all its readers and users to help out in any which way they can, the first event is a soul night on the 22nd October, here are the details:

Latics United plan to run a series of fund raising events over the coming months, the first of which is the ‘First Avenue’ Soul Night on the 22nd October brought to you in conjunction with the Orrell Soul Club.

We all know that Wigan is the home of Northern Soul and Latics United has found five Northern and Modern Soul DJ’s who will all be spinning tunes free of charge on the night. DJ’s include the following:
Blunny, Andy Garside and Tony Mundey (Orrell Soul Club) and Sean Livesey and Finton (First Avenue Soul Club).

Tickets are priced at just £5 but you are advised to buy in advance from the Latics United website.

If you prefer, you can just make a donation via Paypal at the website which is situated at www.laticsunited.co.uk. For more information about the event, or to get involved ring 07930 397 960.