Jordi Gomez to stay on for two more years 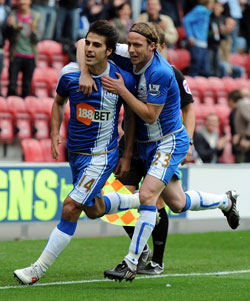 Wigan Athletic fans favourite (whether that be to slate or cheer) Jordi Gomez has committed himself to the club for a further two seasons. He signed the new deal this morning showing his determination to win fans around.

The club statement reads: Wigan Athletic are delighted to announce that midfielder Jordi Gomez has chosen to commit himself to the club for a further two years, signing an extension to his current contract until 2014.

With his current contract expiring in the summer, Manager Roberto Martinez was very keen for the former Barcelona midfielder to tie up a deal ahead of several other high-profile options on the table.

He said: “We are delighted that Jordi is committing himself to our football club. He is our top goal-scorer this season and his vision has provided us with a real playmaking role in the side. He has accumulated a fantastic experience in the Barclays Premier League and with potential offers waiting for him in the summer, it is a fantastic gesture towards the football club that he has chosen to commit to Wigan Athletic at this crucial moment of the season.

Gomez said: “I would like to thank everyone at the club for making me feel welcome. I feel I can keep improving here and now I want to keep focusing on my game and do all I can to finish the season strongly and keep our Premier League status.”

Signed from Espanyol in 2009, Gomez has netted six times in 42 league starts for Latics. He has made another 17 appearances from the bench.