Kirkland safe for another season 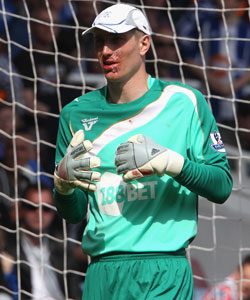 Chris Kirkland is ready for his fifth straight season in the number 1 jersey for Wigan Athletic and he is hoping for a decent start to get things rolling in the right direction.

The once injury prone stopper was lucky to get more than ten games a season in between the sticks, but after taking a gamble by bringing him here, Latics have seen him become a constant feature in the team.

The England International still has aspirations of playing for his country again and he knows that good week in week out performances will be needed to that. To that end he is looking forward to the new season and is convinced that we will see a progressive Latics team next term.

“To be going into my fifth season is great, I’ve felt good ever since I arrived,” said Kirkland. The club took a big gamble on me in the beginning, to which I owe a lot of thanks to Paul Jewell and of course the Chairman who wanted me here. The main thing for me is that I’ve been able to play regular football which is what you want as a footballer.

“I only live 20 minutes away from the training ground and I look forward to coming into work every single day, something I intend to carry on doing for many years. This will be the club’s sixth year in the top-flight, and to be a part of it all playing alongside and competing with some of the best teams in Europe is a great feeling.

“But just because we’ve managed to stay here doesn’t mean we’re bedded in now, we’ve seen in the past that any team can go down and we’ve just got to make sure we get off to a good start come August.

“Hopefully the gaffer can bring in the right players to replace the ones we’ve lost so far, and that’s the way it is for nearly every club nowadays, you change your team every season and you have to grow as a group very quickly to achieve your goals.

“If we can get that good start which is vital then hopefully it’ll set us up for a good season. Every season is more difficult than the last and it’ll be no different this time round. The teams who have come up are looking strong, especially Newcastle and West Brom, and I think, with respect, they’re better than the teams who went the other way.

“Newcastle for example is going to be playing in-front of a 50,000-strong crowd at home, which will be a massive test for any team going up there.”

Looking to the future Kirkland hopes the team can continue progressing to further cement themselves in the Premier League and establish a higher position in the table; the manager’s a very ambitious man and so are the players. We don’t want to be just scrapping for survival each year, we want to progress but it’s a slow-process.

“To build it up and get to that position takes time. We managed to get around that point in the table under Steve Bruce and it was a great feeling and that’s what we’ve got to aim for. Hopefully if the gaffer continues to bring in the right players it’ll set us on our way.”