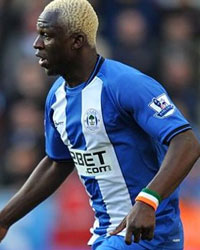 As expected Roberto Martinez has returned to his old club to take striker Arouna Kone to Goodison.

The 29-year-old joins the Merseyside club on a three-year-deal for an undisclosed fee and will join up with his new team mates later in the month after being given extended leave due to international duty with the Ivory Coast.

Kone scored 13 goals in all competition for Wigan following his arrival from La Liga side Levante last summer.

However following Wigan’s relegation from the Premier League he had expressed a desire to continue his career in the top flight of English football.

In total he made 38 appearances for the club with 2 of those coming from the bench.