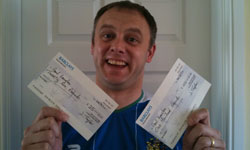 All the winners have received their winnings now from the Prediction League Competitions from last season, lano23 banked a total of £125 for his first in the EPL and second in the Cups and we have the picture to prove it.

Lano23 was there or there abouts for most of the season and showed that consistency was the key to his success. There were plenty of players that set it alight over a month or two, but as they say ‘It is a marathon, not a sprint’.

The win in the Premier League prediction competition was joined up with a second spot finish in the cups prediction league with another cheque for £25, the winner of the £80 Cups competition prize was won by one of our Canadian Latics fans. Wigan Canuck has had his money paid into his paypal account.

Bobby C got £35 for his Premier League Competition second spot, Mark Lawrenson came third but was not eligible for a prize due to him not paying his subs. The third place went to Willy Wombat who accepted an entry to the World Cup Prediction League instead of the cash. Sharpy won the final prize in the Cups League.

Well it was a long season, but as the World Cup is upon us, you will see that we have set up a ‘winner takes all’ Prediction Tournament that has already got around £130 in the pot. You could just play for fun though, nearly half the players do, but if you want to be in with a chance of a summer bonus, have a look at the competition by clicking here.