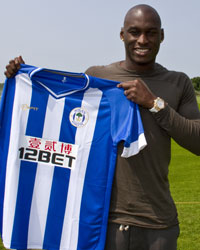 Coyle was delighted to have captured the sought after striker who leaves the Baggiess on a free transfer after letting his contract at The Hawthorns run its term.

Speaking to the official website the Wigan manager said of his latest recruit: “To bring a player of such calibre to the football club is a great piece of business.

“He’s shown his qualities at the very highest level, and when I spoke to Steve Clarke at West Brom he told me how he didn’t want to lose him, which goes to show how important he has been at his former club and proof that he has the capabilities to be a Premier League forward, never mind a Championship one.

“So I’m really exciting to bring him in, the first of the strikers to arrive and I’m sure he’ll bring a great deal to the team. He’s powerful, can play anywhere across the front line and has pace to hurt defences. With the amount of games we have to play this season it’s important to have these kind of players at the club.”

Fortune joins Chris McCann, Stephen Crainey, Thomas Rogne, James Perch and former team mate Scott Carson among the new faces at the club for what is undoubtedly going to be a challenging fresh chapter in the history of Wigan Athletic.