Latics call on Junior fans to make the difference 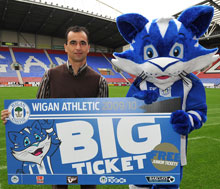 Latics are again showing the way as they make available thousands of free tickets for youngsters to come and watch live football at the DW Stadium, here is how you can play your part.

Wigan Athletic have announced that they are again making up to 2,000 tickets per Barclays Premier League game available to local children free of charge. The Big Ticket 2009 follows a very successful debut last season which saw thousands of children get access to live top flight football, many of whom for the very first time.

With the new initiative, the Club is looking to increase junior support, encourage attendance at the ever-popular Junior Stripes Matchday Club and retain and nurture fans of the future. Both manager Roberto Martinez and mascot Stripey the Laticat are supporters of the project.

The tickets will be made available for the South Stand of the DW Stadium as of the forthcoming home game versus Chelsea on Saturday 26th September (3pm kick off) and will then continue throughout the season at selected games. The South Stand houses a dedicated kiosk for the Club’s younger fans.

The Big Ticket initiative is a two-pronged scheme which will both give Season Ticket Holders the opportunity to receive FREE junior tickets for up to 6 selected games along with schools, groups and organisations who will be invited to apply for tickets once in every four games.

Upon application, schools, groups and organisations will be placed into 4 “pots”, for a maximum of three games each during the remainder of the season. Further tickets will be distributed through the Club’s highly successful Community Trust, Playing for Success centre, Wigan Athletic Ladies and Junior Latics.

The Club anticipates that each game will be vastly over-subscribed and a ballot system will be in operation to ensure the fairest method of distribution and that as many varied children as possible can get to watch their favourite Latics players.

As the Club spreads its message further than the boundaries of the town, applications for the tickets are also being invited from schools and organisations from outside Wigan.

Roberto Martinez is a keen advocate of the scheme, “Every team needs the support of its fans and we are no different. A strong home vocal support can often make a big difference, particularly in close games. The Big Ticket is a great scheme and anything that can encourage new supporters to this great club gets my full support.”

Paul Hunt, the Club’s Commercial Director commented, “We must strike a balance between encouraging new support and ensuring we do not disadvantage our Season Ticket Holders who have committed themselves to the Club for the full ten months of the season. I think we have managed to do this with the Big Ticket and we look forward to welcoming new young fans to the DW Stadium.”

Additionally, parents or family members wishing to accompany the child lucky enough to obtain a free ticket can also take advantage of a £5 discount off the already competitive regular matchday prices to enable them to accompany them to the game.

There will also be increased effort to encourage high utilisation of the tickets and to develop a unique South Stand atmosphere. There will be a free prize draw for all attendees to win great Latics prizes for themselves and their school. One lucky school will even get a visit from two first team players in advance of each game to deliver their free tickets!

The Club Shop is also getting in on the action by providing FREE face painting and introducing Matchday Specials, a range of special offers specifically for our junior supporters.

Only tickets applied for and collected in advance of the day will be accepted. All tickets made available by the Club are strictly subject to availability.

Season Ticket Holders should either download the application form, collect a form from the DW Stadium (Ticket Office, Club Shop or reception) or contact the Ticket Office on 0871 66 33 552.

All schools/organisations will be contacted with application details but further information can be obtained by visiting www.latics.tv, via the Matchday Programme or by contacting the Club on 01942 774000 (email bigticket@dwstadium.co.uk).