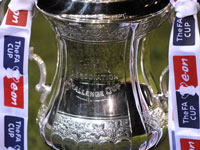 Of all the places to go in January, Wigan Athletic will go to Hull for their third round tie in the FA Cup. The match will be played on the weekend of the 8th or 9th of January 2011 and we’ll let you know wjich as soon as the TV companies work out which ro move.