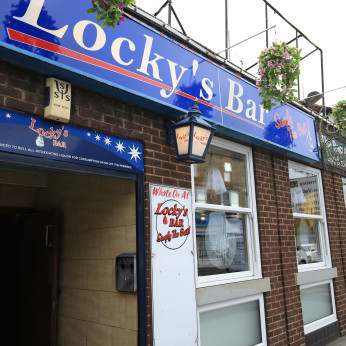 The trip to Rotherham was a cold, snowy and windy one, bit over 1,000 fans made the journey to watch Wigan Athletic stamp their place firmly at the top of League 1.

Of course fans travel in different ways, and this game was no different with a contingent making their way to Wombwell before starting their journey to the Stadium.

Apparently the atmosphere was superb and everybody was in good form, respecting the area and the Bars they called at, one of the Bras felt these fans deserved recognition for their excellent behaviour.

It will never be published in the press and the Police in the area won’t publicise it as they still want everyone thinking football fans are still thugs, hooligans and criminals.

Going to many places these days you will roll up at an empty bar with a doorman on saying they can’t let away fans in. This is based on absolutely nothing but Police prejudice, it is them that let this bar not get a nice pay day every home game, not the Landlord.

The Licensee is the one probably stood behind the bar twiddling his thumbs almost crying at the amount of business that is being turned away.

The Football Supporters Federation (FSF) has run a campaign for many years now, “watching football is not a crime”, and never a truer phrase has been penned. No other sport receives the flack that our oldest and most followed sport gets.

At least comments like this show the true face of a football day out:
Arthur O’Loughlin, Landlord of Locky’s Bar in Wombwell, Barnsley said; “Just a big thank you to all the Wigan Athletic  supporters (over 200 of them) that came to my bar yesterday, 25/11/17.

“It was an absolute pleasure serving them, they were polite, cheerful, and friendly. And in return we gave them pie chips and peas! (And a few shots).

“Many thanks Locky’s Bar. Wombwell Barnsley”

Just goes to show that the brush football fans are generally tainted with via the Police and Media is totally off the mark. More commendations like this being distributed will hopefully shove the extremely narrow and archaic view some try to continue pushing firmly up their behinds.

Nice one to those noisy majority that continue to show that football fans are not criminals and are as respectful and courteous as other sports fans or people in the general public, because that is what they are no  matter what is thrown out there to tarnish us.