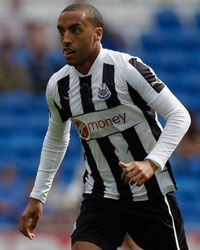 Wigan Athletic have completed the signing of Newcastle United defender James Perch for an undisclosed fee.

The 27-year-old has joined on a four-year deal and becomes Owen Coyle’s fourth signing of the summer following the recent arrivals of Chris McCann, Stephen Crainey and Thomas Rogne.

Mansfield born Perch is a product of Nottingham Forest’s youth academy and was originally played as a striker but injuries forced Forest to utilise him in defence where he impressed. He is equally comfortable in midfield and is even known to be quite handy in goal.

He made his senior debut for Forest against Wigan at the JJB Stadium on the opening day of the 2004-2005 season. He started the game, which ended 1-1, but was replaced in the 75th minute by Des Walker.

He went on to make 222 appearances for Forest over the next 7 seasons, scoring 14 goals, and was even made club captain, before he made the move up the A1 to join Newcastle United in July 2010 for a fee rumoured to be around £1 million on a four-year deal.

During his time at St. James’ Park he has made 80 appearances for the club in all competition and found the net on one occasion – opening the scoring in a 4-3 defeat against Manchester United at Old Trafford on Boxing Day last season.

After completing his medical and putting pen to paper on his deal Perch told the official website: “It feels great to be here with a new challenge ahead of me, and I’m very excited at getting that started.

“The prospect of helping to get the team promoted was really appealing and I can’t wait to meet the rest of the boys and get started.

“I think Wigan Athletic is a great club and after speaking with the manager, his ambition and determination to take the club back to the Premier League where it belongs is something I wanted to be a part of.”