Latics’ Reserves show their potential in win over Villa 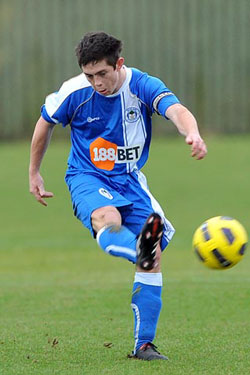 The Premier League might look a bit dire for Wigan Athletic, but the reserves are showing the reverse of that by topping the table after a magnificent win over Aston Villa.

Latics skipper Daniel Redmond’s wonder free-kick proved to be the difference in the end after another great performance from Latics’ second string saw off a much fancied Villa side at Robin Park Arena, raising them back level on points with league leaders Manchester City – albeit until only tonight potentially.

In a game of few chances, Latics maintained their great 13 month unbeaten record at Robin Park, though with the visit of Chelsea and table toppers Arsenal coming up this month, that will be severely tested.

Leading the line for a very young Latics, the tireless Jordan Rugg won a free kick down the right hand channel shortly after the break after breezing past England defender Stephen Warnock. Redmond swung in an unstoppable curling effort around Villa keeper Elliott Parish into the top corner from fully 25 yards.

Man-of-the-match Redmond was instrumental throughout but this was a tremendous team effort, in which Latics had to handle long spells of pressure from Aston Villa, who came closest to scoring when Sammy Caruthers saw his low shot brilliantly tipped around the post by Lee Nicholls.

Nicholls had a relatively quiet afternoon, however, although he was strong when called upon, especially in the closing minutes as Villa surged forwards.

Latics’ best other effort probably came in the opening minutes when Rugg foraged an opening down the left this time, but with Parish totally out of position, debutant Sean Myler was unable to turn the ball into the empty net.

Another huge positive for Latics was the return of Northern Ireland International Jonathan Breeze following six weeks out with an ankle injury.