Latics results from May 3rd haven’t been too bad over the years. 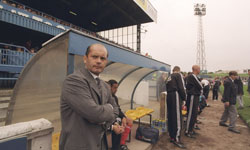 May 3rd has been a good day for Latics to play football, competing in 8 matches on this day since our entry to the football league. Out of those eight games there was just one draw, a 0-0 at Springfield Park in front of 5,528 and 7 wins…..

The first of those wins was at the Recreation Ground where we won 3-0 against Aldershot in front of a crowd of 2,683, David Shearer scored twice and Frank Corrigan pinned the other, Latics finished 6th in Division Four; it was our second season in the Football League.

In 1985 Doncaster were the visitors to Springfield Park where 2,606 spectators saw Paul Jewell and Tony Kelly bag two each in a 5-2 demolition, David Lowe scored the final goal of the rout, Latics finished 16th in Division Three and won the Freight Rover Trophy.

In 1986 Wolves were on the wrong end of a 5-3 hammering in front of just over 4,000 at Springfield Park in the final game of the season, Warren Aspinall scored two penalties on the way to his hatrick with Steve Walsh and Graham Barrow scoring the other two. Despite the fantastic win we missed out on promotion to the Second Division by just one point.

1989 saw Bristol Rovers visiting Springfield Park, it was the second game in three days and 2,529 had a treat as we tore apart our visitors. Brian Griffiths, David Thompson and Andy Pilling all bagged in this 3-0 win that had us finishing 17th in Division Three.

7,106 fans crammed into Springfield Park in 1997 to see if already promoted Wigan Athletic could go up as Champions. Mansfield Town were the visitors and goals from Graham Lancashire and David Lowe in a 2-0 win assured us the top spot in Division Three (4th Tier), we pipped Fulham on goals scored.

Barnsley were the visitors for our final home game of the 2002 – 2003 season, Tony Dinning was the only goal scorer as we blitzed 100 points for the season and was promoted to the second tier in English football for our first time ever, 12,537 was the crowd at the JJB Stadium that day.

Villa Park was the scene in 2008 when 42,640 wholly expected us to lose to high flying Aston Villa, but Luis Antonio Valencia had other ideas as he fired in twice for Latics to win 2-0 and avoid having to get a result against Manchester United on the final day to survive.

All in all an extremely goo day for Latics seeing 7 wins and a draw, hopefully we will carry on the good omen with a win today against Hull City