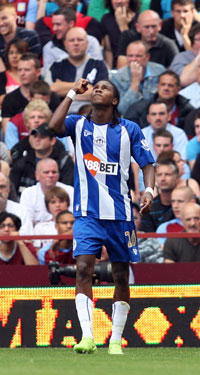 As always the start of the Barclays Premier League season brings a lot of optimism and hope, and this season had extra spice with the return of a certain legend; Roberto Martinez had come back home to manage our beloved Wigan Athletic.

With the return of Bobby, the season looked even more promising with a new style of play, fresh transfer targets and new ambition sees the club wanting to progress in a positive way. The closed season saw transfers in and out of the club. Jordi Gomez and Jason Scotland followed Martinez from Swansea City, Mohammed Diame and Antonio Amaya made the trip from Spain to Wigan and Hendry Thomas made his long awaited move to the DW from Deportivo Olympia.

Pre Season
A shaky start to the pre season fixtures saw Wigan start at Crew Alexandra away. An inexperienced Wigan team fell at the first hurdle under Martinez’s reign. The best way to gel is the pre season camp and once again the team took part in a training camp in Holland. The training camp was then followed by games against Norwich City and Preston North End, the latter of the two seeing Wigan taking a good following to Deepdale against and arch enemy. The Latics following were able to see a new look Latics side win at Preston and also the positives of very attractive football. Finally came the welcome home for Roberto Martinez. St. Mirren at the DW Stadium, over 5000 packed the Springfield Stand and finally a hero’s welcome to Roberto.

August
A fantastic start to the season at Villa Park, which saw a thunderous rocket from Hugo Rodallega propelling Wigan to a winning start, and, from the fans prospective a very positive start. The style of football that Martinez had brought to the club suited the players selected and the mentality of the team. This result however could well be seen as a false dawn.
With so much optimism within the camp Wigan returned to the DW to face newly promoted Wolves. After the result against Aston Villa many of the Latics faithful really believed that this could be 6 out of 6 points wise and a truly fantastic start. This however was not the case and Latics were out muscled and out fought. A one nil defeat followed by a five nil demolition was compounded when Blackpool beat Wigan in the Carling Cup at Bloomfield Road. The month ended with a defeat at Everton and many Latics fans wondering where the team was that won at Villa Park.

September
The only way that the previous month’s criticism can be stopped is with a win and Wigan did just that against a strong West Ham United side. A positive win against a team that would be in and around Wigan all season long. An away trip to Arsenal followed and even the hardened Latics fan could not see a positive result coming and true to form, none did. However comes a date for every Latics fan to remember. Saturday 26th September 2009. Wigan Athletic 3 – 1 Chelsea. The score line says it all. Wigan had finally overcome all their previous demons and had beaten one of the ‘top four’. Wigan had outplayed Chelsea and the team had shown that they could actually compete with the top teams in the league. September was in all not a bad month for Latics as there was only one defeat and 6 points out of a possible 9.

October
October started with a stutter, then a bang, then fell flat. The highlight being a 3-1win over new boys Burnley at Turf Moor, which was their first defeat at home this season and a Latics performance which showed plenty of character. Halloween was a day to forget as Latics went down to a four goals to nil defeat at the hands of a struggling Portsmouth team. One thing is for sure and that’s Wigan don’t half make things difficult for themselves.

November
Possibly one of Wigan’s worst months in the Premier League. A draw and a win either side of that score line at the hands of Tottenham Hotspur. The demolition at Tottenham highlighted Wigan’s defensive frailties and raised questions as to if Wigan would survive the dreaded drop. An unpleasant stat to come from the game which was that teams beaten by 9 goals in the English top flight have all gone down in recent years. What had gone so wrong between the win at Villa Park and the result at Tottenham? The team was still the same and the tactics had not changed. Many of the Latics faithful believed that the result was a one off ‘freak’ result.

December
S-no-w good! Derby day at the DW was cancelled due to freezing conditions and the festive period brought with it some difficult league fixtures. Wigan still remains unbeaten on Boxing Day but there were some harsh lessons for Latics to learn. A missed penalty at Stoke overshadowed a positive Wigan performance and a spectacular goal from Maynor Figueroa’s goal from his own half. Wigan were once again threw away a positive situation when ahead to Birmingham City, they managed to lose 3-2. This saw Martinez stating that the performance was worthy of a win but ultimately Wigan needed to control situations.

January
Apart from defeats at the end of the January period the New Year started positively. After being a goal down against Hull in the FA Cup Wigan showed that they have character and desire to do well. A 4-1 score line showed that the players did want the club to succeed and that the team were starting to get back on track. One negative from the month was the two all draw at the hands of Notts County and the fact that there was an extra game in an already packed season.

Manager – B+ – A great start but consistency needed

Overall – B – Latics must improve in order to stave off the relegation threat.

Looking towards the rest of the season and Wigan should be safe. Gary Caldwell can sure up the leaky defense and as long as Wigan take their changes then relegation should not be an issue. Wigan can hope for 11th but a more realistic view would be 14th/15th in the league.