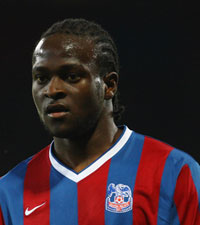 As of today Wigan Athletic have a new striker, 19 year old Victor Moses signed a three and a half year deal from cash strapped Crystal Palace

Tony Finnegan, Moses’ agent, has confirmed that his player has put pen to paper after turning up for a medical at the DW Stadium earlier this morning – why couldn’t he have done it on Wednesday hey??….

The player was said to have taken minutes to agree to personal terms and the deal has now gone ahead. We are rumoured to have paid just £2.5 million for a young player that has courted the attentions of some of the top clubs in the Premier League and Europe.

The move could help ease Palace’s financial problems after the Championship outfit went into administration last week and refused to let Moses play in case of injury. The young striker will now vie for his place in the squad and will more than likely play some part in the game against Sunderland next weekend.

Latics are screaming out for a striker at the moment, with an inform goal scorer we could well have been 9 to 12 points better off this season. Moses has scored six goal in his last nine outings for Palace and we are hoping he will make a similar impact at Latics