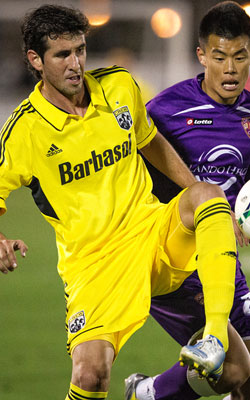 Wigan Athletic have announced a change in their pre-season arrangements with the club now jetting off over the Atlantic for a training camp in the States.

Owen Coyle will take his team to North America for a ten day training camp with friendly games against MLS side Columbus Crew and USL Pro league side Pittsburgh Riverhounds planned as well as a possible third game.

Coyle said: “The opportunity came up for us to go to the States and was too good for us to turn down.

“The players will love the facilities over there which are first class and it is a great way for us to begin our pre-season preparation in readiness for August 3.”

Latics will take on The Crew, coached by former Everton and Poland international midfielder Robert Warzycha, on Saturday July 13th at the 22,555 capacity Columbus Crew Stadium before travelling the relatively short distance east to Pittsburgh to take on the Riverhounds six days later.

The Riverhounds, who were only formed in 1999, play in the third tier of American football (sorry soccer) and play their home games at the 3,500 capacity Highmark Stadium.

They are coached by 36-year-old Justin Evans who played college soccer at local university Penn State. Upon his graduation Evans became the first ever player for the newly formed Riverhounds.

This will be the first time Latics have gone Stateside but they have come up against American opposition before with Tulsa Roughnecks, including former Derby and Leicester legend David Nish, visiting Springfield Park for a friendly in October 1979 when Ian McNeill’s side ran out 4-3 victors.

As a result of the trip to the States the scheduled friendlies against Oldham Athletic and Morecambe have now been cancelled – as is the German training camp where they were due to face Hannover 96 again.