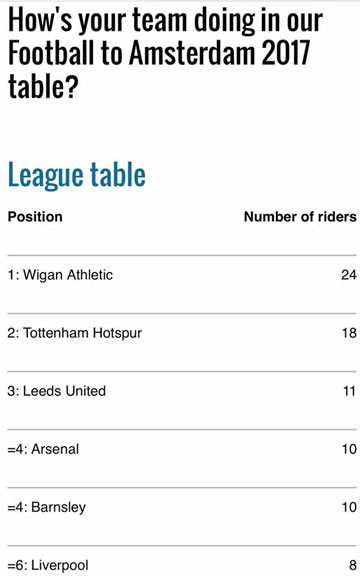 Prostate cancer kills one man every hour, yet eight out of ten men who are at risk aren’t aware of it.

It affects as many men as breast cancer affects women, yet receives half the research funding.  1 in 8 men are at risk of prostate cancer – the most common cancer in men.

Wigan Athletic have adopted their own Latics2Amsterdam cycling team as their official charity partner this season in order to increase the awareness of prostate cancer and to raise funds for Prostate Cancer UK.

The Football to Amsterdam ride starts at The Oakwell Stadium, Barnsley on Friday 9th June 2017 and finishes at The Ajax Stsdium, Amsterdam the following day after cycling a total of 146 miles. The Latics team propose to start at the DW Stadium on Thursday 8th June and cycle to Barnsley before joining the official ride.

At the present time, the Latics2Amsterdam team are the biggest team in the ride, have raised the most money and hold positions 2,3 & 4 for the highest individual fundraisers. The team would like more Latics fans to join them on the ride (and the party in Amsterdam). Information can be found here. You don’t need to be fit right now, a full programme of training rides are planned.

Individual riders are pledged to raise a minimum of £1,000 in sponsorship for Prostate Cancer UK. The team have a number of fundraisers planned including a Race Night on 25th March, a sponsored 100km bike ride (in association with Morrisons Supermarkets) on 30th April and a Casino Night at the DW on 6th May.

Further information about the Latics2Amsterdam team can be found here, or they can be contacted on info@latics2amsterdam.co.uk