Due to the irritant nature of the Europa League meaning Premier League teams play on a Thursday, lots of games are put back to Sunday. Logic suggests that the quality of games on Sunday should eclipse the action seen on Saturday. This was definitely the case this weekend.

Those that tuned into Match of the Day witnessed a poor total of eleven goals in six games, those that watched Match of the Day 2 the following evening saw a staggering 20 in just four matches. Plus all of Saturday’s action as well, of course.

Anyway, enough plugging for the BBC and onto the action I go, and the early tone for the Premier League has been set. One Manchester club wins and sends a message to the other saying: ‘Beat That.’ Which on Sunday, they emphatically did.

Manchester City traveled to White Hart Lane for what was expected to be a tight affair between two of the challengers for the top four. The 1:30pm kick off meant City could top the table with a win.

Spurs, still with the dark cloud of Luka Modric’s transfer saga looming over them, stood in City’s way. There was a time when these two sides were almost parallel in their quest to break the top four, eventually, Spurs beat City to it and finished fourth in 2010. How times have changed, and it’s all down to money. 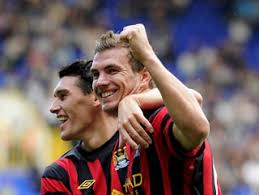 City’s starting eleven featured six signings that joined City after the 2010 season, with an aggregate cost of a staggering £160million; Redknapp’s team on the other hand could boast only Brad Friedel and Van der Vaart that weren’t at the club in 2010, that’s a total cost of £9million. Oh and City even had the likes of Milner, Balotelli and Tevez on the bench, Spurs had Bassong, Livermore and Pavlyuchenko. Contrast?

In an unbelievable demonstration of one side standing still and the other gladly overtaking, City’s blistering early season form means that they must be considered genuine title rivals. Spurs on the other hand, will just be glad to see the back of the Manchester clubs.

Edin Dzeko also provided a great contrast, this time between the overpriced flop he appeared to be before the summer, and the world beater he looks like after it.

He helped himself to four goals which were all superbly taken as City ran riot, new arrival Samir Nasri fitted into City’s flowing attack beautifully on the left side of a fluid front four. The quartet of Nasri, Silva, Aguero and Dzeko made Spurs look foolish as they eventually ran out 5-1 winners.

You think that was impressive? For Fergie and co, it was a case of: anything you can do…

And boy did they show they could do better.

The 4pm kick off was another encounter between Manchester and North London, the trends were startlingly consistent, if anything more obvious.

United had started the season brilliantly, despite a scare at West Brom on the opening day; Spurs were convincingly brushed to one side on Monday to secure maximum points from two games.

Arsenal, despite the accolade of qualifying for the Champions League group stages, have made a nightmare start. No goals and two red cards in two games has been dismal, looking for a lift to kick start their domestic season, a trip to Old Trafford was perfectly timed.

What followed was a drastic humiliation of Wenger’s players capitulating and United running riot.

In February 2001, United shocked the Premier League by thrashing Arsenal 6-1 at Old Trafford to secure yet another title. The odds for a repeat scoreline had dropped to 4/1 at half time. In hindsight, only an idiot would have bet on that happening. Only 6-1? You must be kidding.

United’s hero back in 2001 was Dwight Yorke, who scored a hat trick despite a disappointing personal season for the smiling assassin. The opening goal was scored the United striker who now wears Yorke’s number 19.

Danny Welbeck capitalized on indecision at the back to make it 1-0, David De Gea then showed that maybe he’s not a ‘dodgy keeper’ after all as he saved Robin Van Persie’s spot kick, a crucial moment in the game.

By half time, United were 3-1 up and cruising. Despite Arsenal picking up their performance early in the second half and threatening to punish United’s slight complacency; they failed to take advantage, what followed was an onslaught. 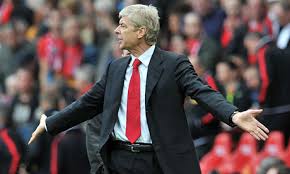 I’m sure you’re aware of the final result: 8-2. And I’m sure you’ve heard the joke about how fans would 8-2 be an Arsenal fan, from a personal view, it’s hard to put into words how significant and catastrophic that score line truly is.

8-2. Think about it, that’s appalling. I remember back in 2007 when League 2 strugglers Macclesfield visited Chelsea in the FA Cup. The Silkmen ended up with 9 men and their centre back in goal, and they still managed a comparatively respectable 6-1.

Arsenal may have been at far from full strength, and they may have had a terrible start to the season, but 8-2 is unacceptable and embarrassing.

United took advantage of a very uncharacteristic bit of tactical naivety by Arsene Wenger, surely a manager of his experience should realise you can’t go and attack without a plan B or defensive game plan with a weakened eleven at Old Trafford? That’s like sky diving with a parachute made out of plastic bags and a with a ruck sack full of bricks on your back.

The problems at Arsenal have been well documented and I touched on them last week so I’m sure there’s little I can mention that hasn’t already been, but this is a drastic time for Arsenal.

Fergie’s men on the other hand, well they are in dream land. Just when City thought their money had got them to top spot after their win at the Lane, their annoyingly good neighbours go and top it off. I suppose you’d call that typical City?

If the title race between these two continues at its early breathtaking quality, then we are in for a treat. The attacking entertainment and brilliance of Silva, Young, Nasri, Rooney, Aguero, Nani… Tevez, Valencia, Dzeko, Chicharito…(twenty five names later)… will be quite frankly breathtaking.

I for one, am looking forward to this season’s Manchester derby.

Although the thought of the title race is mouth watering, I can’t help but think a third member would enhance it slightly.
With Franco Di Santo firing them in, why can’t the third challenger be Wigan?

Okay, there’s quite a few fundamental and obvious reasons why it’s not going to happen, but how else could I link Man Utd and Man City with little Wigan?

Neil Warnock’s QPR were the third and final promoted team that we have to face this season, and after the three games, to have 5 points and two clean sheets makes me a happy Latic.

The pessimists might point out that we should have won all three if Al-Habsi hadn’t messed up against Norwich and Watson had bagged that penalty at Swansea. They may also claim that if we can’t beat Norwich and Swansea then who can we beat?

My answer to that, is QPR. And if we’re judging future results by previous results, then we should be able to beat Everton too. Although, it doesn’t work like that does it? Otherwise they’d be a way of showing that Peterbrough can beat Barcelona. 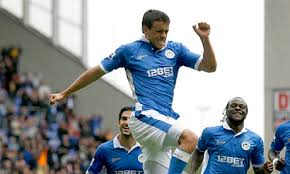 To the average Latics fan, Franco Di Santo is probably perceived as a poor striker who despite his work rate, doesn’t score enough and is therefore branded as a bad player. I would agree with this point of view.

Yet you could be forgiven for thinking otherwise now as his two strikes against QPR were the difference between the sides. Despite being a tad lucky with both efforts, doesn’t the boy deserve a bit of luck after just two goals in 72 previous appearances?

Wigan can go into the incredibly frustrating two week International break sitting reasonably pretty in 8th place. Darksiders, it could be a lot worse, we could have lost 8-2 at Old Trafford.

It was also refreshing to see a certain Mr Martinez on the Match of the Day 2 panel, between the two less knowledgeable Dixon and Hansen.

Despite Roberto’s appearance, the others just couldn’t resist having subtle jabs at Wigan’s expense. With comments such as “The last hammering like that was Wigan’s 9-2 defeat at Tottenham, how did you feel about that Roberto?” from Colin Murray, the cheek of him! We all know the last proper hammering was Blackburn’s 7-1 loss at Old Trafford last year, so ha!

Martinez’s diplomatic and absolutely zero percent controversial answers maybe didn’t please the tabloid reading viewers, but they did for me. How is a man so nice a success in football?

I’ll see you all after the International break, if you don’t all die due to the footballing form of boredom torture by then. I’ve got this far, and I still haven’t mentioned the Challenge Cup Final. Pretty impressive don’t you think?

Brian Griffiths of the Week: I will choose Dzeko due to the fact he scored more and has made a greater improvement than anyone other contender, yet Rooney, Silva, Nasri and Di Santo are close runners up.

Maurice Lyndsey of the Week: Any of the fourteen unfortunate Arsenal players that took to the field or Wenger for a pitiful and embarrassing performance.

Comment of the Week: For the second week running, it looked like it would be another jibe aimed at our attendances: “And due to the Chellege Cup Final, the DW Stadium is very empty, with just 10,000 fans, including the 1500 QPR followers” That little inaccurate gem was from a FiveLive commentator called Stu. Yet the winner is Tony Cascarino for his description of Arvand Traore’s performance at Old Trafford: “He’s had a holocaust game.” No further comment on that one.