Martinez and Latics’ fans look to have got it all 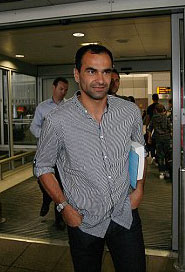 After all the speculation about Wigan Athletic losing Roberto Martinez to Liverpool or Aston Villa, common sense has kicked in with Mr. Whelan and the future looks good for manager and fans.

Liverpool came calling and Bobby played it cool, had he gone to see them straight away, he might not have learned about him playing second fiddle to a ‘Director of Football’ and been ousted before Christmas.

To his credit though, he took his time (to the dismay of the majority of Latics fans that worship him) and realised that the grass really isn’t greener. Yes he wants a challenge, but the poisoned challis that is Liverpool FC could very well end someone’s career and their fans certainly don’t help (well they helped us).

Now Brendon Rodgers is going to break the Welsh hearts by doing what Martinez did, leave them when things were on a high. The Swans are now the one’s wondering what to next as finding the quality manager it will need to continue the Ethos started by Martinez will be very hard.

The non starter of the Aston Villa job seems to disappeared as well now that our Chairman has seen it the way Roberto does and has committed the finances to secure a very bright future for the club.

I am in a privileged position where I can speak to Roberto quite often and at the end of this season when I asked if he was going to stay (in fact I asked three times on separate occasions), he never once said he was going to leave. The fact that he never committed to saying he was going to stay I could have interpreted as he was going to go, but it was the way he delivered his answer to the question that made me feel he wanted desperately to stay.

He is the heart beat of Wigan Athletic and he wants only the best for the Club, he wants to take us to the next level and beyond but he needed certain things ironing out for him to that and I think this is why he played hard ball.

He wasn’t getting the answers of Whelan so he succumbed to advances from elsewhere to show Dave that he could go to ‘bigger’ things if he chose, but all he wanted was a commitment to certain areas he knew needed improvement within the set up.

He wanted his backroom staff secure in their jobs, he wanted the Youth set up financed and he wanted a transfer fund. It looks like he has got what he wanted now and so he can continue the building work here and look to a very bright future.

Hopefully now, the Wigan public will see this and get behind the boys like they did in the last ten games, because together we believe, together we conquer and together we can go to places we never dreamed…… Thank Bobby, you won’t regret it.