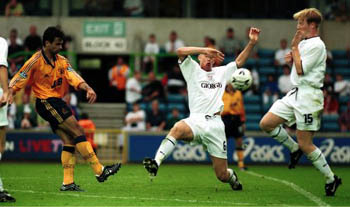 Wigan manager Roberto Martinez exited the JJB Stadium back in June 2001 and with him took a great deal of memories – plus a tin of Uncle Joe’s. He spoke to Cockney Latic at the time and thanked the Wigan fans for making his time as a Wigan Athletic player such a happy one. We take a look back at the stories as it was published back on June 29th 2001.

Roberto Martinez, the last of the ‘Three Amigos’ bid a final farewell today to the town of Wigan and the club that he has served so loyally for the past six years.

The likeable Spaniard told Cockney Latic that he has yet to decide where his future lies and that he will return home to Spain this evening and discuss his plans with his family before deciding what he does next.

He told us that a couple of decent offers from his native Spain had been put on the table and one in Scotland, believed to be Premiership side Motherwell.

However when we asked him, tongue-in-cheek, not to come back and haunt us he replied that a Second Division club had made enquiries but he had turned that offer down as he didn’t feel ready to play against a club that was very much in his heart as it would be too difficult a task to ask of himself.

He also added that his contractual obligations with Sky TV could have a bearing on the decision he has to make over his future but at the end of the day football came first and if it meant having to give up his pundit appearances on Sky’s coverage of Spanish football then that would be something he would have to do.

Roberto had written a brief statement to the fans thanking them for all their support over the years and you can read it first here:

My contract is about ot expire on the 30th June. It’s impossible to resume in a few minutes my six years at Wigan Athletic (too many good memories) so I’ll take this opportunity to thank all the supporters of this club for your help, care and support you gave me over my time at Wigan, especially in my hard moments and even more important when I was about to leave the club (you’ll understand it was the hardest moment of my career ‘cos in my opinion it’s not easy to leave the best club in the world).

You made Jesus, Isy and myself feel at home since the first day and my heart will be your home from now on.

I know Lady Luck forgot about Wigan in the last few years but I’m 100% sure that success will come to JJB Stadium ‘cos you really deserve it.

I’m thanking you all again and asking you to keep supporting the team and the Chairman because this is going to be the key of future success. Mr. Whelan has been very important for this club, he is the empire of Wigan Athletic and one of the most impressive persons I’ve ever met in my life, he deserves every success and your support.

It has been an honour to play for Wigan and today I’m happy to look back and take with me so many memories where you all took part. Happy to have been through all my hard times during my contract and I can assure that my family, my love for the club and your support and care made it possible.

I will try to answer all your letters I had, I can’t do it beforehand and special thanks for your tribute in Cockney Latic web site (I really think it was something special) and every single effort you showed to see me at Wigan Athletic next season.

Before I finish I would like to thank two managers who tried everything to bring 1st Division football to the JJB and tried, as well, to extend my Wigan Athletic career who were Steve Bruce and before him Bruce Rioch.

Finally, send my regards for every person who feels for this special club that I hope never will lose the family status and every supporter and person related to the club who’s got Wigan Athletic colours in their heart.

You lose a player but you have a very Latics fan. A big thanks for everything from the bottom of my heart.”

We have said this before and we’ll say it again when we wish King Bobby all the best for the future, wherever that may be, and thank you for all the memories that you have given us.

The arrival of the ‘Three Amigos’ was certainly a major turning point for Wigan Athletic and we certainly will never forget that.