Match Day Programmes to your door

In days gone by we religeously bought the match day programme, it was part and parcel of going to the game.

They were collectors items for most, something to read if the game was unbearable for others.

But in these unprecedented times, where going to the game is not possible, we watch at home on TV, but for the home games we can now have a match programme delivered in time.

Catch up on all the latest goings on, plus read extra articles from George Chilvers (a Cockney Latic contributor and moderator on the message boards) and Jeff Rourke, a stalwart of the Wigan Athletic Supporters Club and the font of all Wigan Athletic knowledge.

Here is the information and links from the official site: 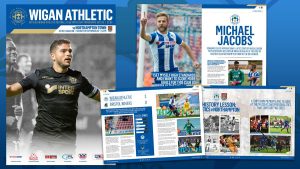 We Are Wigan, the official programme for all Latics’ home matches, will return for the five remaining behind-closed-doors Sky Bet Championship home fixtures as limited-run special collectors’ editions that will be posted to your home in time for the games.

Production is underway for a double-header programme to cover the home games against Blackburn and Stoke City, with big-match editions for the visits of QPR, Hull City and Fulham all to follow. Each programme will be for a limited print run only and will be produced in conjunction with the Club’s programme partners Ignition Sports Media in time to arrive before kick-off*. So get your orders in before it’s too late!

To ensure supporters don’t miss out on these keepsakes of an unprecedented season, a mini-subscription to cover all four editions is now available for £14.99 + £1.70 postage to a UK address. To order your copies visit the Ignition programme shop and look for the Wigan Athletic Behind-Closed-Doors Editions graphic.

Overseas supporters will also be able to order copies but these will not be sent out before each game and instead a single bundle will be sent once all editions have been printed.

Individual copies will be available to purchase in the build-up to each fixture.

(*Editions will be posted to UK addresses via Royal Mail in time to arrive before the game, subject to unforeseen Royal Mail service interruptions)