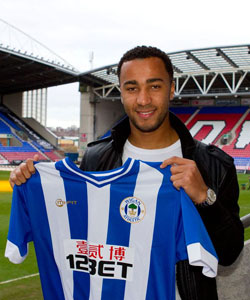 Cardiff City striker Nicky Maynard has arrived at the DW Stadium on loan.

The 27-year-old successfully underwent a medical today after agreeing to join Uwe Rosler at Wigan until the end of the season.

Maynard joined Crewe Alexandra at the age of seven, progressing through the ranks at their youth academy and impressed enough to be awarded a professional contract in the summer of 2005.

He made his debut for the club against Millwall at Gresty Road at the end of April 2006 and made an instant impact coming off the bench for the start of the second half and immediately finding the back of the net.

After just one appearance in his first season as a professional he showed the Alex faithful what he was really made of in his second with 19 goals in 38 appearances.

His goalscoring exploits brought him to the attention of many clubs and he joined Bristol City for the start of the 2008-09 season in a £2.25m deal making him their record signing.

He made his debut for City in a pre-season friendly at Ashton Gate against Belgian side Royal Antwerp and marked it in style with a 30-minute hat-trick.

Maynard first season at Ashton Gate saw him finish the club’s leading scorer with 11 goals to his credit and almost doubled that amount in the second year with a total of 21.

In total he made 131 appearances for Bristol City and scored 46 goals.

Failure to agree to a new contract saw him made available and with Latics chasing his signature he was snapped up by West Ham United on January deadline day 2012 for £1.65m.

He made 17 appearances for the Hammers with 4 goals to his name but after only a few months at the club he was sold to Cardiff City in August for around £2.75 million.

Injury was to sideline him once more and only three games into his Cardiff career he suffered a torn anterior cruciate ligament which was to rule him out for the season.

His recovery went better than expected and the striker made an 84th minute appearance in the final game fo the season when he came of the bench to score a stoppage time penalty in a 2-2 draw at Hull as both sides were promoted to the Premier League.

However he has struggled to feature this season and has only managed eight substitute appearances plus two starts in the Capital One Cup with his only goal coming in the second round at Accrington.

He has failed to feature in the squad since Ole Gunnar Solskjaer’s arrival at the club.

Speaking of his latest signing Wigan manager Uwe Rosler said: “Nicky is at the stage of his career where he wants to play regular football again after his injury last season.

“He wants to prove a point to himself and also to other people. That’s a perfect scenario for us.

It matches our ambitions. I will be patient with him because he has not played in a while. But he’s fit, and he’s ready to go, ” he continued.

During his time at Wigan Maynard will wear the number 29 shirt vacated by the departed Nouha Dicko and will be available for this weekend’s trip to South Yorkshire for the game against Doncaster.