McClaren set to be unveiled 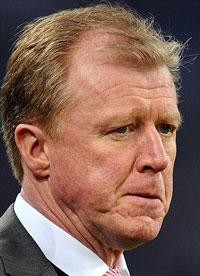 Former England coach Steve McClaren looks set to be named as the next manager of Wigan Athletic in the next 24 hours it would seem.

The 52-year-old Yorkshireman has been out of work, so to speak, since the end of February after he called time on his second spell as head coach with Dutch side FC Twente.

A host of names had been linked with the vacant manager’s position at the DW Stadium with Manchester United coaches Rene Meulensteen and Mike Phelan listed alongside the likes of Brighton gaffer Gus Poyet and MK Dons’ young manager Karl Robinson to be given the job – even Dutch legend Marco Van Basten was touted as a person of interest.

However McClaren emerged as a front runner along with Owen Coyle to fill the void left by Roberto Martinez over the past week.

However it now seems that the former Bolton Wanderers and Burnley manager has been pipped to the post with Dave Whelan opting for European experience – a choice that will meet with approval from most Wigan supporters.