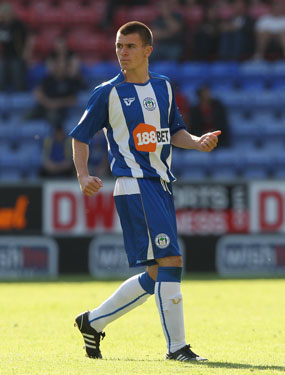 Callum McManaman has been tearing up the reserve League for Wigan Athletic, he also had a good spell in the Cup games for the first team which has earned him a new contract at Latics.

Wigan Athletic are delighted to announce that young striker Callum McManaman has put pen to paper on a new contract that will keep him at the club until 2013.

The Knowsley-born 20 year-old broke into the first team picture this season – the first player to come through the ranks and play in the league since England full back Leighton Baines, who of course returns to the DW Stadium tomorrow for the massive crunch match with his current side Everton.

McManaman has now made eight appearances for Latics, four of them in the Barclays Premier League. He also starred in Latics’ victory at Hull City in the FA Cup 3rd Round, marking his full debut with a stunning goal.

Unfortunately, the head injury he sustained in the next round against Bolton Wanderers slowed his progress this season, but he finished the season in sensational form for the reserves and Roberto Martinez views him as a prized asset for the future.

“Callum has continued to progress this season,” he said, “and we are delighted he has now signed this new contract.

“Callum represents a real example for every youngster at our football club. He’s just turned 20 and he’s already played in the league and had a big impact in this season’s FA cup campaign.

“Technically, he’s a very gifted player with a natural raw talent and over the last 10 months he’s developed immensely, tactically and physically, and we are all excited to enjoy the next his years of his football.

“Many other youngsters should be inspired by Callum’s behaviour and now all we want is for him to enjoy his football and help the first team squad on a daily basis.”

McManaman, who is a distant cousin of Liverpool legend Steve McManaman although they don’t know each other, joined the club as an apprentice in 2007, having previously been at Everton. He was offered professional terms in the summer of 2009, and actually made his debut in the Premier League as a youth team player, when he came on against Portsmouth in the final game of the season.