MK Dons – the man in the middle 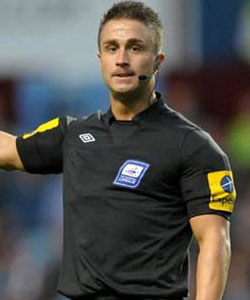 Meet the man with the responsibility of ensuring fair play during Wigan Athletic’s first ever trip to Stadium MK.

Referee James Adcock was promoted to the Football League national list as recent ago as the summer of 2011 following on from a successful trip to the USA where he was selected to officiate at a prestigious international youth tournament.

PE teacher Adcock took up refereeing as a 16-year old in 2000 with a great deal of encouragement from his father who was an assistant referee in the Football League for many years.

Having previously taken charge of games in the Conference and lower leagues Adcock’s first game in the Football League came at Macclesfield in February 2011, prior to his promotion to the list for the following season.

The visitors to Moss Rose that afternoon were Wycombe Wanderers, who ran out 1-0 victors.

The win came courtesy of a Gareth Ainsworth goal just before the break with current Latics player Rob Kiernan claiming an assist on his debut for the Chairboys whilst on loan from Watford.

Three players were cautioned by Adcock including Ainsworth, for his goal celebration, and former Wigan midfielder Lewis Montrose.

However it was in second-half stoppage time that that the Nottinghamshire official was really called into action when a bad challenge sparked a 20-man brawl after which resulted in three players getting their marching orders – a bit of a baptism of fire!

He was pretty busy in his first full season as a Football League official, refereeing a total 33 of games, mainly in League One and League Two. During those games he issued 87 yellow and 6 red cards during the 2011/12 campaign.

Last season he took charge of the same number of matches with 94 yellows and 5 reds dished out.

Adcock has only reffed at one game involving Wigan and that came this season when Ipswich Town were the visitors to the DW Stadium.

Christophe Berra and Tommy Smith were both booked for the visitors as Latics won 2-0 to take all three points on the day.

To date this season he has refereed 17 games, given out 59 yellow cards and sent off 4 players.