MK Dons – they played for both sides 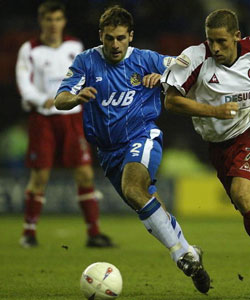 Let’s take a look at two players who can boast playing for both Wigan and MK Dons during their career.

Paul Mitchell signed for Wigan in August 1999 after arriving from Manchester City where he had joined on school boy terms.

Mitchell made his first appearance for the first team as a 74th minute replacement for Pat McGibbon against Burnley in December of that year in the Auto Windscreens Shield First Round – his only appearance during that season.

He had to wait over eight months for his next appearance, and his first start, when he lined up against Scunthorpe United in August 2000 at the JJB in the First Round of the Carling Cup.

However his league debut at Wrexham four days later will certainly one that he won’t have forgotten in a hurry.

Mitchell was introduced to the game in place of Scott Green just after the hour mark but lasted barely five minutes when a poor challenge on Carlos Edwards saw his first appearance in the Football League come to a premature end – and all on his 19th birthday.

Primarily a defender but later utilised in midfield Mitchell made a total of 40 starts for Wigan during six seasons with the club with 41 further appearances from the bench.

He had a short spell on loan at Halifax during the 2000-01 season but his last season with Wigan saw him spend time on loan with Swindon Town and then three months towards the end of the campaign on loan with Milton Keynes Dons where he made 14 appearances for the newly formed club.

Wigan won promotion to the Premier League at the end of that season but Paul wasn’t part of Paul Jewell’s plan for top flight football and was released and allowed to join the Dons on a free transfer.

He went on to make 68 appearances for the Milton Keynes Dons in 31/2 years as a player with the club and captained them for a while.

However, aged only 27, his playing career was cut short with Mitchell announcing his retirement from professional football after struggling following a broken leg and ankle sustained two years earlier at Meadow Lane against Notts County.

Mitchell continued to work at the club taking up the position of Community Ambassador with the club’s Sport and Education Trust.

Following manager Paul Ince’s departure in May 2010 and Karl Robinson’s subsequent appointment the club, Mitchell was appointed as Head of Recruitment.

He left MK Dons in January 2012 to take up a similar role at Southampton where he continues to date.

Colourful, larger than life character Jimmy Bullard was signed by Paul Jewell from Peterborough United for £275,000 in January 2003 and quickly established himself at the club.

He was named in the 2002-03 PFA Division Two Team of the Year as Latics steamrollered their way to the title and promotion to English football’s second tier for the first time in their history.

In his four seasons with the club Bullard was a virtual ever present and made 157 appearances (4 as a substitute) and scored a total of 11 goals.

He will remain a part of Wigan Athletic folklore as a firm fans’ favourite and was an integral part of the side that climbed the leagues and ultimately took up their seat at the top table with the giants of English football.

Bullard eventually left Wigan to join Fulham for £2.5 million in May 2006.

During his time at Wigan Bullard had remained injury free but only four games into his Fulham career he injured his knee only on the half hour mark against Newcastle at St James’ Park – an injury that proved to be a cruciate ligament that sidelined him for 15 months.

He joined Hull City during the January 2009 transfer window for a fee of £5 million but on his debut for his new club, as a second half substitute, he picked up another injury to the same knee and was again ruled out for a lengthy spell.

Ipswich Town took him on loan for the second half of the 2010-11 season, where he scored five goals in 16 appearances, and then took him on a free transfer during the summer.

Bullard had signed a two-year contract at Portman Road but was allowed to leave after just one season and eventually he joined MK Dons on a short term contract.

He had spoken of his desire to have one last crack at playing after struggling with injury but after just two league appearances from the bench and one start in the Johnstone’s Paint Trophy – a total of 80 minutes – he announced his retirement in October 2012.