Morsy and Egypt Book Their Place at Russia 2018 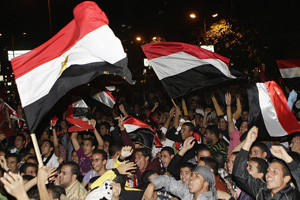 Latics captain Sam Morsy made history with Egypt against Congo as the Pharaohs won 2-1 to book their spot at next year’s World Cup.

A 95th-minute Mohamed Salah winning penalty ensured that Egypt won’t be missing out on next year’s showpiece. Wild celebrations followed as the Egyptians win means they will end a 28-year absence from World Cup action. Morsy’s Egypt have now qualified with a game in hand and no longer require a result when they line up against Ghana in November. Despite the fact the side are well-justified as 150/1 outsiders in the international football betting to go all the way in the tournament, many countries would be thrilled to be in their position.

“Egypt vs. Algeria 2-0”  by Muhammad غفّاري
Wigan skipper Sam Morsy was an unused substitute in this historic encounter but will almost certainly be on the plane to Russia next year. Sunday’s result wasn’t only a proud day for the Egyptians but everyone connected to Wigan Athletic Football Club. There isn’t a bigger event in world football and Wigan’s talismanic captain will be playing in it.
Could this be the first of two milestones this season for Morsy? The Latics are beginning to look like serious promotion contenders as they sit second in the table after 12 games and the 2013 FA Cup winners will be eyeing the chance to return to the Championship at the first time of asking.

“Walking away from the DW Stadium – Wigan” by illarterate
The disappointment of last season’s relegation seems to have been completely overcome. The atmosphere around the club has changed in its entirety and that has to be down to promotion expert Paul Cook, whose appointment in the off-season has ignited the charge at the DW. Cook has made the right appointments and selecting Morsy as his captain is making sure the team is always giving 110%.
The combative midfielder has already picked up five yellow yards in only eight games and in turn, was slapped with a one-match mandatory ban. Manager Paul Cooks doesn’t see this as a problem and has instructed the midfielder not to change a thing. Cook is obviously a fan of the way Morsy plays the game and believes without his energy in midfield the squad may become overrun by opposing teams.
This dynamic midfielder is developing all the time and undoubtedly gives Wigan that bite in midfield they were missing for the majority of last season. After such a positive start it will be crucial that he keeps himself on the pitch and not serving bans for poor discipline. There is no lack of determination or commitment but needless yellow cards could hamper the Latic’s promotion progress.
The Egyptian international has been an integral part in changing the direction of the club around. Qualification for the World Cup will give him a huge amount of confidence as he heads back to Lancashire to focus on a season that will hopefully provide promotion. Morsy will be desperate to head back from the World Cup next summer to play in the Championship with Wigan.