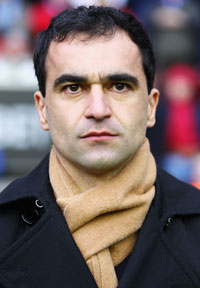 It is never dull at Wigan Athletic as we find out that 12BET are to extend their contract, we have a new signing and although it appears Roberto hasn’t actually resigned, we have over 50 applications for the manager’s job.

One of the major problems for a Football Club being relegated from the top flight is keeping the sponsorship deals going and all credit to 12BET for sticking with Wigan Athletic as they start life in the Championship in just 6 weeks time.
The Asian outfit were strongly rumoured to want to pull the plug if we were relegated, but weighing up the facts that we are FA Cup Winners and will be in the Group stages in the Europa League next season must have been a strong enough pull for them to carry on sponsoring us.

Player signings are also hard to grab at this time of the close season, made even harder when we don’t even have a manager as such. But well done to Marko Marosi who sealed a one contract (his first professional contract) before Martinez went to speak to Everton.
On the subject of the gaffer, does anybody know what is going on? His sure-fire job at Everton is looking more unsure by the day and by all accounts he hasn’t actually resigned, just asked to speak to other clubs.
Seeing as Latics have now attracted over 50 applicants for the manager’s job (besides loudmouthblue, Griff, bickymon and Salford_44 etc), what do we do if Martinez doesn’t get the Everton job (or Stoke)?
Are we to just let him take back over or reapply for his own job? Or do we give the likes of Steve McClaren and Gus Poyet an interview or even the job?
All tihs and more is being discussed on the all new Cockney Latic message boards, get involved like over 300 others did in March-May.
Like I said earlier, it is never dull and June looks to be very interesting indeed.