Offers on table for Dicko 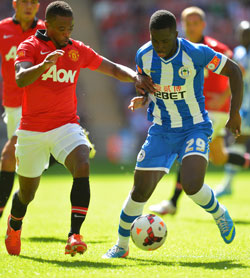 Uwe Rosler has revealed that Wigan have received two bids for Nouha Dicko who recently returned from a successful loan spell with League One side Rotherham United.

Speaking to the official website the Wigan manager said: “We have had enquiries about Nouha, but I’m not in any rush to make a decision because I want to see him more in training and in games to be able to make up my mind.

“When you score goals like he did in League One for Rotherham and in the Championship with Blackpool, he becomes hot property and there is no shortage of takers.”

The 21-year-old French forward scored six goals in six appearances for the South Yorkshire side but was called back to the DW Stadium at the end of last month and made a 75th minute appearance in Wigan’s 3-3 against MK Dons in the FA Cup last Saturday.

Millers manager Steve Evans would certainly love to have Dicko back at the New York Stadium and it would come as little surprise if they were one of the clubs to have shown their hand.

“You can never say never about getting him back.”, Evans said.

“We will follow it closely in 2014. If he was go on loan again, I know what his club of choice would be.

“Wigan have had a couple of injuries and are fully entitled to call him back. Of course we’ll miss Nouha; he’s a top player and a top-class person as well.

“Our chairman and his vice-chairman are fully aware of the situation and that we will always have interest in someone like him. I would love to work with him again.”

Another club that had been tracking his progress are Millwall who reportedly were showing interest before his loan move across the Pennines and with Ian Holloway, who knows all about Dicko from his two spells on loan at Blackpool, now in charge at The Den they could just make a move.