Oh we do like to sing beside the seashore 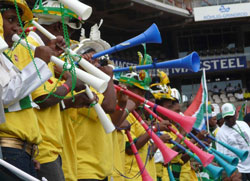 You’ll no doubt have read this elsewhere on the net, but for those that do seem to have missed it, here is an idea from a fans supporters group to get the fans of Latics back in singing mood. From the sea of despair that we appear to be in on the field, we are asking fans of Wigan Athletic to join in with this fan’s group to have a day of celebration at Blackpool this Saturday.

They write: We have had a wonderful twenty years since Dave Whelan took over the club and older fans have plenty other great memories before that to draw upon too.

So let’s celebrate the players who have worn the blue and white, celebrate the trophies and promotions and celebrate the unbelievable history of Wigan Athletic with ninety minutes of noise.

It’s Blackpool away, it’s always a good away day with fans in ahem, boisterous mood so let’s make the most of it as it may be the last chance we get to salvage our season. Who knows – it might even have a positive influence on the pitch.

We originally hoped to come up with “ninety songs in ninety minutes” maybe even featuring ninety players but this press release would be a little bit too long. We also do not want to detract from the efforts of current players.

Nevertheless, here’s some to get you started, some obscure, some well known. Feel free to add your own…….and let’s have a party

Not forgetting timeless classics such as…
Let’s Hang On
The Great Escape (hmm)
Come on you Latics yo oh oh oh oh
A little Respect
OOOO AHHHHH OOOO AHHHHH!!!!
Just can’t get enough
Auto Windscreens, we won it two times
The Hovis Song
We love you Wigan, we do
FA Cup Champions, we know what we are…
We’re by far the greatest team the world has ever seen
Wigan till I die….
And of course
You Are My Sunshine
TODAY, TOMORROW AND FOREVER

The songs can be as obscure as you like, just bring your voices and prepare to make a wall of noise.
Of course, we don’t want to detract from those players on the field so it might even be the time to think up some songs about our newer players yet to make a name for themselves as well.
But for ninety minutes, let’s sing for the team, for players past and present and see where it gets us. Maybe even a rare victory…..
Print this piece off and hand it to your friends! Get your phones out to video it and we’ll show everyone in the world of football that we stick with our team to the end no matter how tough times are….
Blackpool away is probably our last big turnout this season unless things change so let’s go there and ENJOY OURSELVES!!