Oman what an honour for keeper 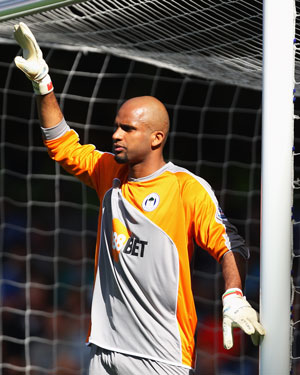 Ali Al Habsi has praised Wigan Athletic for arranging the first ever visit of an English team to his home country of Oman, it says it is a great honour. Latics are now a big name over there due to their number one playing for us and our games are showed on a regular basis…. lets hope we give them a bit more to cheer about over the next 14 or so games.

Latics will be heading off to the sun to play in a much warmer climate than we are experiencing here at the moment. The players will get some much needed sun on their backs whilst they go through some rigorous training schedules ahead of the game against the national team.

Al Habsi will have a dilemma though, which team will he play for?? Or will he opt for playing a half on each side. Either way the team will get some much needed respite from the relegation worries at home, hopefully they will have been eased a bit with a win over near rivals Bolton on Saturday.

“I am so happy and proud about the prospect of going home with Wigan Athletic,” he said yesterday to the Wigan Evening Post.

“It will be slightly strange when Wigan plays against Oman — I might have to have a chat with the gaffer because I wouldn’t want to play against either of my teams, I am the only player from the region to be playing in the Premier League, and that means Wigan Athletic are a very popular team in Oman.

“But I’m sure the team will like everything about my country — the people, the weather, and the facilities and hopefully it will help us when we return to the Premier League. It’s probably the best time to go to Oman, because the temperature is around 20-25 degrees,” he noted.

“With the way the weather has been over the past week or so, it will be nice to feel a bit of sun on our backs and get down to some good training.” he added.