Wigan Athletic’s return to Wembley was an inevitably massive day for the club, even if we failed to sell out our allocation. Although our victory has been overshadowed by a mindless act of hooliganism, let’s not allow anyone to forget the fact that this was our day, which cannot be taken away by a group of thugs, and what a day it was.

I think we were all like kids waiting for Christmas in the run up to this one, or at least I was anyway. I was up bright and early, eagerly anticipating anything the day out had to throw at me. Besides a brilliant match, I think we will all take away our own individual anecdotes from the day out itself, which is what I think makes experiences like this so special.

Personally, I didn’t know what I was looking forward to more. Simply seeing the iconic arch for the first time in the flesh was a moment I’ll never forget, neither will the view as I first stepped out of the concourse; but the game itself was a corker too. We as a group of fans had waited for 14 years for a return to Wembley, we were owed a perfect day out.

For a group of semi-intoxicated Northerners who had rarely previously visited London, I was pleasantly surprised that me and my mates successfully navigated ourselves around the place. Although it didn’t all go to plan.

When our train arrived at London Euston Station at 12:30, we had almost five hours until kick off. The obvious way to lead up to the game would be to visit a pub, so that’s precisely what we did. One of my mates had heard that Baker Street had a few decent pubs so we decided to follow his advice. We jumped on the tube and a few minutes later we’d arrived at Baker Street.

What greeted us was hardly what I expected. The only pubs relatively close to the station were a rough looking Wetherspoon’s and a pub surrounded by what looked like caging called ‘The Globe’. The latter was possibly the most intimidating sight I’ve ever seen, inside the caging were about 500 Millwall fans chanting songs which could be heard several hundred meters away. Only one look towards the skinhead infested crowd provided the cue for us four to turn around and head back to the station sharpish. I feared four guys bearing Northern accents and Latics tops would hardly be the most welcome visitors.

Besides that minor scare, my day ran rather smoothly. Outside Wembley we found a pub which was rather more appealing as it was one of those allocated specifically to Wigan fans. A few pints (at a fiver each!!) in this boozer impressively fitted out with incredible memorabilia (including a signed England 1966 World Cup winning strip) and a trip to the slightly less impressive Subway up the road left us ready to enter the home of football. 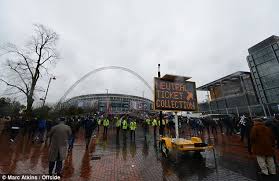 th the momentous arch towering above us providing the perfect focal point, I couldn’t help but have that realisation moment that we’d finally made it. Although the build up was immense, actually being there is something else. The pouring rain actually added to the atmosphere if anything, being Wigan something wouldn’t go quite right, and it turned out to be the weather.

With a scarf and a programme in hand as souvenirs of this day, I was ready to enter Wembley. It felt like a rite of passage, as if I was visiting my holy grail as a football supporter. This whole day felt less like just a football game and more like a religious experience.

Now I’ve set the scene: down to the match itself.

Although being in a cup semi-final at Wembley is undoubtedly a high pressure scenario, it was very relaxing to watch a Latics match that was away from the typical relegation battle stresses. Previous visits to Wembley had provided a similar respite to the pressure of Play Off battles, I suppose that just displays how our club has evolved. It was very calming to be able to watch a game without having to worry about what effect it will have on the table when combined with the ever changing/anticipated results of relegation rivals. It was a simple win or lose knockout scenario, and that’s what I loved about it.

The opposition being Millwall could have gone either way. As a typically hardworking and unattractive team, their style of play could have suited a high pressure occasion better than ours. Also, as the QPR game suggested, the players could freeze under the pressure of being favourites and struggle to play as freely and comfortably as their best. There was no doubt though, that Wigan had the greater technical ability of the teams and had the potential to control and dominate the game by imposing their Premier League class upon their lower league opposition on a larger pitch, and so it proved.

Despite losing the ball and giving away a half chance very early on, I was very impressed by how the boys in red (which looked unfamiliar) comfortably kept possession and controlled the flow of the game. In having such large spells of possession, Millwall were kept guessing and their fans’ noise levels were nullified.

With Latics confidently probing around the edge of the box and the movement of the front three a particular threat, it looked only a matter of time before Latics struck an opener. David Forde had been forced into action by Arouna Kone and Callum McManaman, so it was no surprise when Shaun Maloney swept home an excellent chipped cross from Arouna Kone.

I don’t know about you, but for the few seconds immediately after a goal, especially in such a big occasion, I just lose it and go mental, grabbing the nearest person and shouting my lungs out. That period of madness in celebration of the opening goal was probably my fondest memory of the entire day.

Latics deserved their half time lead but inevitably, the second half started in a different fashion. Predictably, Millwall came storming back, and enjoyed a 15 minute period of pressure in the second half. Supported by their expectant supporters behind the goal they were attacking and with Kenny Jackett’s words ringing in their ears, Millwall fired many a high ball into the Latics area where defenders nobly dealt with the danger. Millwall’s closest effort was when a ricochet off Paul Scharner’s heel just scraped over the bar, I still can’t quite believe it stayed out.

The lead was preserved though and it was clear that the longer the game went on, the more likely a second goal would kill the game. I’ll admit that during the second half when Jordi Gomez looked tired and didn’t track back when possession was lost, I was calling for him to be substituted. However he was the man who provided the killer ball which freed McManaman for the second goal. The youngster capped a brilliant performance with his quick feet and frequent stopovers which destroyed both Millwall full backs when he evaded David Forde and slotted into an empty net. Cue delirium in the stands and me jumping around like a box of frogs.

I was delighted not only for the win, but because the goal meant the game would be finished in 90 minutes, which meant we would definitely make our train. The 9pm departure meant extra time and penalties would make catching it rather difficult. Although that would definitely not have caused me to leave the stadium early, it would have caused me to stay in a Premier Inn and fork out more money for a train the following day. I can’t decide which of those two consequences is worse.

The whole day was incredible and probably one of the best of my life. The full time whistle provided one of those moments when I was really proud of our little club and what we as a group had achieved. As I reached home the idea of an FA Cup Final involving Wigan really sunk in, and a place in Europe with it too. Priceless.