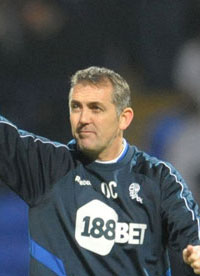 The news will come as somewhat of as a surprise to many who had believed, and hoped, that ex-England coach Steve McClaren was to be given the nod ahead of the 46-year-old Glaswegian.

However it has now been confirmed that Coyle is to take charge of Wigan on a one year rolling contract with promotion straight back to the Premier League at the top of his list of priorities.

Before he can concentrate on that task he will have the job of persuading a number of key players to remain at the club and join in the fight that lies ahead of them.

Player of the Season Shaun Maloney is being tipped with a move away following last season’s relegation to the Championship and a number of clubs are reportedly monitoring the situation.

Influential striker Aroune Kone, who is rumoured to be looking for an instant return to the English top flight with another club, is another player that Coyle will need to persuade that is future is with Wigan Athletic.

Coyle was sacked as manager of Bolton Wanderers in October last year following a poor start to life in the Championship following their relegation from the Premier League at the end of the 2011-2012.

His previous managerial experience began as joint player-manager at Falkirk but it 2 years later when he first properly cut his teeth when he was appointed as manager at St. Johnstone where he enjoyed moderate success with promotion to the SPL almost achieved at the end of the 2006-2007 season – only a last gasp winner for Gretna denied them the title and promotion.

The following season he signed an extension to his contract and guided Saints to the Scottish Challenge Cup Final in November 2007 but a week before that game he was approached by Burnley to take over at Turf Moor and accepted the position.

Coyle guided Burnley to promotion to the top flight after an absence of 33 years following a Play-Off Final victory over Sheffield United and signed an extension to his current contract that would have kept him in East Lancashire until the end of the 2012-2013 season but in January 2010 he turned his back on the club and took over at Bolton as replacement for the sacked Gary Megson – much to the disgust of the Burnley faithful.

His only venture over the border can between 1993 and 1995 when he joined Bolton Wanderers for a fee of £250,000 from Airdrieonians.

He was part of the promotion winning side of 1995 which saw Bolton return to the top flight via the play-offs after a 15 years absence. Coyle scored a vital goal in the 75th minute with Wanderers 2-0 down against Reading at Wembley.

They went on to level the score to take the game to extra time before eventually sealing victory 4-3.

Coyle’s own time in the English Premiership didn’t last long however as he was sold to Dundee United in October of that year for a fee of £400,000.