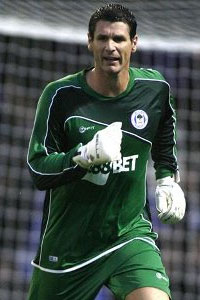 Wigan’s longest serving player Mike Pollitt has extended his career with the club for another season after agreeing to a new one-year contract which keeps him at the DW Stadium until next summer.

The 41-year-old keeper became Paul Jewell’s first signing of the summer of 2005 when he joined on a free transfer from Rotherham United by Paul Jewell as Wigan were preparing themselves for life in the Premiership.

Pollitt initially arrived as cover for John Filan but an injury to the Australian meant that he was thrown in at the deep end and never looked back starting 23 of the games in the Premiership and also played in all but one of Wigan’s Carling Cup games as they went on to meet Manchester United in the Final in Cardiff.

He will be forever remembered for his penalty save from José Antonio Reyes at Highbury in the semi-final second leg – a save, that one can have no doubt, inspired Latics on to the final.

Tragedy struck Pollitt in the final however as with less that quarter of an hour on the clock he picked up a hamstring injury and was forced off the pitch.

Pollitt made just two appearances for the first team last season when he stepped out for both games against Bournemouth in the FA Cup Third Round. However his time on the pitch at Dean Court in the replay was cut short when he picked up a thigh injury and was replaced by Al-Habsi during the break.

He required surgery on that injury which kept him side-lined for the remainder of the campaign but is now raring to go and looking forward to the new season, saying: “I’m delighted to sign; I picked up a bad injury back in January, the worst of my career to be honest, but I’m feeling good now, managed to get some training in towards the end of the season and have been doing a lot of work during the summer to make sure I can come back to training fighting fit.

“This will be pre-season number 25 for me and there’s probably many people who can’t say that so I’m made up to preparing for it and come Monday I’ll be in the pack once more, starting the hard work to be ready for the start of my ninth season at the club.”

Pollitt’s last league outing for Wigan came back in January 2011 as a 62nd minute replacement for the injured Chris Kirkland against Bolton Wanderers at the Reebok Stadium making him one of the oldest players ever to appear in a Premier League fixture.