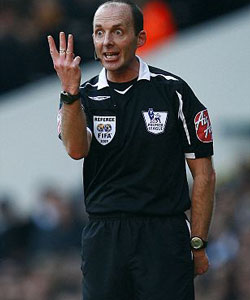 Wigan Athletic had Mike Dean refereeing in the game against Blackburn Rovers this weekend and this is how we think he faired.

Mike Dean took control of Wigan for the third time this season. The first being the 6-0 home defeat to Chelsea and the 2-1 away win at Wolves. A total of 7 yellow cards and no reds had been issued during these games.

Dean is possibly one of the better referees in the league and like to let the game flow. However there was a number of reckless challenges which went unnoticed, especially challenges from Jones on McCarthy.

Two penalties awarded were altogether justified and he did not have to many difficult decisions to make.

They often say the less you hear of the referee the better he is doing. Three yellows issued and nothing too controversial in the afternoon made for a decent flowing game.