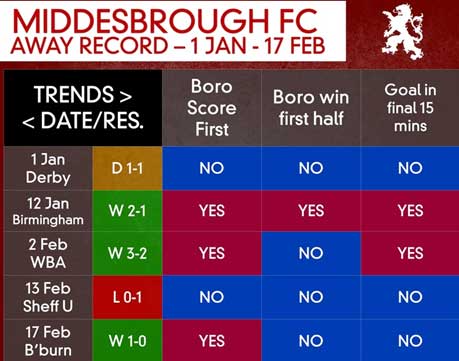 Back in January, we looked at the trends we could expect from upcoming home games, but the away form of opponents was just a peripheral element. One month on, we’re going to take a more condensed look at how Wigan’s first spring visitors to the DW Stadium have improved (or not!) since the turn of the year.

After winning 1-0 at Ewood Park on 17 February, Boro reinforced their standing as one of the three strongest away sides in the division. That result also maintained their position as the meanest away defence in the league, with the clean sheet bringing their concession average per away match to a new low of 0.82.

The Blackburn win also represented the Teesiders’ seventh away win of the campaign, with just two away losses on the record prior to their win in Lancashire. Middlesbrough’s away games are generally low-scoring under Pulis though, with an average of fewer than 2.3 goals per away match being well under the league’s median:

Home league matches against Middlesbrough at this level have been something of a rarity for Wigan, with only two ever played and both ending in score draws. If the opposition is to score, Britt Assombalonga will likely have much to do with it, having been in rich scoring form for Boro away from home.

Though shockingly victorious against Birmingham recently, it is easy to forget that Bolton had taken precisely zero away points from the twenty-one available prior to said win. They also tend to concede most often in the final 30 minutes of play, implying that their resistance is in short supply more often than not.

Bolton’s tendency to fold late is particularly prevalent when travelling, and has contributed greatly to their standing (as of 18 February) as one of three teams now odds-on to in the current Championship betting outright market for relegation. Across the three away league games prior to their win at St Andrew’s, the ‘Wanderers’ had conceded a startling nine goals after the break, with 66.7% of those arriving in between the fifteen minutes immediately after the hour mark (61-75 minutes).

This win over Bolton in December 2013 is one of only two league meetings at the DW Stadium in the second-tier of English football.

Brentford only recently won their first away match in the league after going 15 league road trips without a win – though eight draws from that sequence suggests that the Londoners aren’t as useless on the road as their away points tally suggests.

Of course, a return of just one solitary clean sheet on the road before the last away fixture of February is poor by any standard.

However, they have a real talisman in the form of Neal Maupay, who remains in contention to finish as the league’s top scorer, with the Frenchman projected to smash the 25-goal barrier imminently:

Beyond March, only three more home matches await Wigan. The presence of opponents from opposite ends of the table will force Wigan to take different approaches, and doing so successfully will ensure that the Latics can max out on their strength when playing on home turf.