Roberto breaks the mould with a first fans site interview 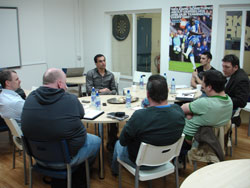 Managers of Wigan Athletic have always said that they were close to the fans and that they would listen to what they had to say; Roberto Martinez is the first to actually do it. In a very frank interview he told it as it was, here is a rundown of what we discussed…

Meeting representatives of the fans web sites is something that most, if not all football managers would not entertain. The face to face confrontation with fans of the Club that they manage is a daunting prospect, but it is one that Latics’ manager Roberto Martinez had absolutely no qualms at all in agreeing to.

After having a chat with him at the fans forum earlier in the season, Bobby said he would be happy to do an interview with Cockney Latic and after a couple of months of pestering the WAFC press officer, not only did he agree to meeting with us, but he extended the invitation to other Latics web site editors too.

The location was the Christopher Park training facility and all the editors met up in the glorious sunshine outside the main reception, it was really good to see Bernard (YOTAC), Migs (Mudhuts), Paul (Wiganer) and Barry (Vital) again, it is a very rare occurance for us to all be a t the same place at the same time.

We were showed through to the ‘inner sanctum’ of the training ground where we waited for Roberto to finish off the TV Interviews. He entered and met everybody with a smile and showed that he really is a gent of the highest order. He didn’t beat about the bush either; he wanted to get into it as fast as he could.

He started off by enthusiastically stating that we are currently the strongest we have been all season, we managed the first half with just 12 players really. He was genuinely excited he with what he called the brightest talents in the Premiership; James McCarthy and Victor Moses. “We were very lucky not to have had any major injuries in the first half of the season,” he said, “but we are in a position now, a strong position to achieve the goal of survival this season and we have the basis of a strong squad to take into next season and to push for the next goal of a top 8 position”.

Being a Premiership Manager doesn’t bring any added pressure; he believes that the biggest pressure is the one you put yourself under. Bobby told us of the massive mental battles he has with the players, especially after the Spurs game. On Sunday the players were fine, then all the media reminders on Tuesday and Wednesday put them on the floor, by Thursday they were destroyed thinking they couldn’t beat Sunderland on Saturday, but they got themselves back up on Friday and beat Sunderland on Saturday.

One of my biggest problems he said he had was that he relied on what he thought were big players who turned out to be big disappointments, we have to assume he means Kapo, de Ridder and Koumas. Things were different in his playing days; he said it was harder for him fighting it out in the third division than in the Premier League today. His skill was always reading the game and as a manger that is how he gains the respect of the players, by hunting out the partnerships, organising them and teaching the different techniques. If you look back to find a top player who has made it as a top manager, there is only really John Cruyff, he was technically gifted as both player and later as manager, he was a genius and along with John Toshack, Arrigo Sacchi and Pacho Maturana you have his top managers ever.

He let us into a bit of information about a couple of youth players that could well be ready to break into the first team next season, the first since Leighton Baines. He expressed his wish to try and bring through one if not a couple every year. He knows that one of the new Spaniards is going to be a star so next season we will have a youthful new team. He will make decisions on players bet6ween 18-22, not before, he wants his players to be able to play any system and they need experience to do this.

He deliberately held back on James McCarthy because he knew he was too green to throw in at the beginning of the season. He wanted to do this with Scotland and Gomez, but needs must and he had to bring them in too early and so we haven’t yet seen the best of these two, he believes they are only just ready and so will be strong for us in the run in. Scotland needs that goal and he has been putting in the extra training and work has been done for him to get over the mental block he is having that a goal will eliminate.

You look at the amount of times this team has hit the post or woodwork we are up there with the top seven, inches away from goals, Scotland three times, Hugo twice and N’Zogbia 5 times, just think where we would be if we had got those goals. The fact that those stats exist, show how many chances we carve out, we just need to convert these chances. He persists with the system because when it is played correctly it our best way of playing. Look at how many games we have dominated; our problem has been collapsing after going a goal down. He says we will see some great things come from Hugo and Marcelo and if there is to be a big signing in the summer it could well be him.

If you look at McCarthy, Moses, Hugo and Marcelo, we have as good a strike force as anybody especially at home. It was agreed that McCarthy is a rare talent who can play anywhere on the park, he is also very strong mentally and is clued in. He turned down Liverpool two seasons ago because he knew he wouldn’t play, he even spent an hour with Craig Lavin last month, on his own as the Scotland manager tried to persuade him to play for him. He came down stairs and said to Bobby “Christ I have no chance of persuading him…”, when he commits he is true to himself; he is a rarity in football.

He was honest when asked about keeping hold of key players in the summer, he said if we are to lose players it will be on our terms and we will replace the one(s) who go with two more. We used to rely on agents, but at the end of the day if an agent wants a player to come to Latics it is because he has failed with Liverpool, Man Utd, Chelsea, Aston villa……… we can’t and won’t work like that anymore, we are looking in Europe, South America and Africa to source our own players, we have eyes on over 100 as we speak right now including a young keeper. He still believes we are just two windows from having that team that will push for a top eight place within two years.

Our next 11 games are vital and as he said earlier he thinks we are the strongest we have been all season now, on asking the players which games we can win they said we can lose all of them but we can also win every one of them, which he believes is a healthy attitude to have. Our problem this season is to get over the mental problems we have when we go one down, we HAVE to get mentally right and right now he thinks the players are.

He wants to have leaders on the pitch, Caldwell is a big natural leader, and Titus is in that transition where he is becoming a leader, Kirkland in the best form of his career, Hendry Thomas and Maynor Figueroa will be at the world cup, Hugo is a huge player and we also have the youth element and energy. Mario is a different sort of captain, he leads by example, but with Caldwell in there you have a different sort of leadership where he will let players know what they should be doing, especially if a mistake is made.

Cattermole was a big loss for us, he was part of the team that Martinez wanted to start the season and it was too late to find a replacement then. He did say though that Lee didn’t look like he was enjoying his football anymore, he watched him for England U21 and was so unhappy that Lee didn’t seem to look like the same player that he wanted to stay at this club. Things were put into prospective when we were told that Catters actually never bought a house round Wigan so it showed his real commitment in the first place, he rented and then at the end of last season just stayed in a hotel. He wanted to go home and when Bruce got into his head as well he heart went too, so when £5 million was offered we upped it to 6 and had to accept it. Bobby said when Lee said he didn’t want to play for us any more it is disrespectful and he doesn’t want players like that in the blue and white.

When asked about Ben Watson he said, “Ben Watson is missing that bit of tempo, he is so close to being a Premier League player and as West Brom play a similar way to us he felt it was a good opportunity for him to try and get that missing link that he needs. We can call him back at any time and he is still a part of the plans here, he could end up being a better player than Catters if he can get the extra part to his game, and I hope he can get it.”

A couple of quick fire questions….

It’s national pie week, what is your preferred variety – Meat and potato
Why do you not wear a Wigan Athletic scarf – it isn’t because of the clash with the brown shoes, but plans are afoot to get one for the visit to Manchester City.

Our joint thanks were also conveyed for Dave Whelan naming the West stand after Springfield Park and Roberto was asked to pass these thanks on to Mr. Whelan himself. We ran out of time, so until next month that is it. So be ready to get more questions in for next time, I’ll let you know when it will be.