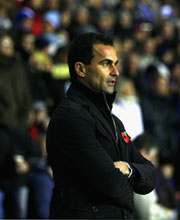 Wigan Athletic will once again play in the Premiership next season and it is the second time Roberto Martinez has kept us there, but what improvements were there….. we have a look.

The 2010-2011 season saw us average a point a game up until February when we all of a sudden started to string some very decent performances together and averaged 1.5 points a game on the run in to end on 42 points, 6 more (17%) than last season. Verdict: The points tally is up and last season would have seen us finish in 14th place, so good improvement here.

The goal scored column has always been a bit on the low side since we entered the league, we ended up three more than last term on 40 (8% up); this season saw us score our second highest amount of goals, since we entered the Premier League. Verdict: Only in our first season did we score more with 45 and so a big improvement was seen in this department also.

Goals against has always been in the 50’s until Roberto arrived and shipping 79 last term and 10 more in the first two games of this season didn’t bode well. But the defence knuckled down and found a bit of consistency in the end and ended on 61 (23% down). Verdict: After the nightmare start things did steady and we didn’t have as many big losses a last time out, so an incredible improvement is seen in this department.

The results saw us win the same amount of games (9), we drew a lot more (15) and loss a lot less (14). Verdict: We tightened up quite well at the back and fought out some great draws that would have been losses last year.

Overall, although Roberto had his knockers and critics, this season turned out to on the whole one of the more successful ones in our 6 year stint at the top. He seemed to sort out the defensive issues and this was in the most part due to the midfield join better with the defence.

The goals have always been a problem here, but again this has improved and we recorded our second highest total since being promoted. There will still be some that think the style of play is a few choice adjectives, but if the latter end of this season is anything to go by, next season could see us achieve a very respectable finish.

The point of this article was to get things in prospective and at the end of the day we wanted to see improvement and to that end the gaffer has delivered. What we want is to see more next season and see if we can tempt back some of the stay away fans that refused to give Bobby a chance.

Overall Verdict: B+, the manager started off badly but brought it around and pulled off yet another survival season, we want to see a bigger leap next season so we don’t have to have kittens at the end of next season, well done Roberto, the lads and the background staff.