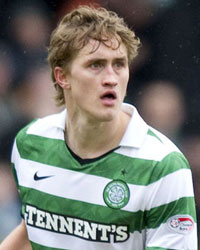 Wigan Athletic have been very active in the transfer market so far and this has extended to Owen Coyle signing Norwegian defender Thomas Rogne this morning.

Latics have not been this active in a transfer market for quite some time and hopefully this shows the intent of new manager Owen Coyle to get the team ready and fighting fit in plenty of time for the new season.

In past seasons we have seemed to wait until pretty late on in the window to make any moves, but it looks as if we will be travelling to America with a pretty full squad, the official statement reads:

Wigan Athletic have again moved quickly in the transfer market and today secured the signing of Norwegian international Thomas Rogne.

After completing a medical at the DW Stadium the former Celtic defender agreed a three-year deal with the club, and becomes Owen Coyle’s third signing as Latics Manager, following the arrival of Chris McCann and Stephen Crainey last week.

Upon his arrival, Rogne said:” It feels great to have joined the club, the process was quite short which was good and I’m looking forward to getting started now.

“It’s an exciting chapter for me; English football is something special and being Norwegian we follow the game over here very closely, so to be a part of it makes me very happy.

“I’ve seen Wigan Athletic play quite a lot when the club was in the Premier League, and obviously the whole of Europe has been speaking about the club after the FA Cup win in May.

“I think many people have been charmed by the way the club is run and how the team plays, so it’s great to be here.”

The 23-year old spent three years at the Parkhead club, making 50 league appearances and scoring two goals for Neil Lennon’s side, after arriving from native team Stabaek in 2010.

At international level, the defender has two caps for the Norwegian senior squad, and this summer helped the Under-21 side reach the semi finals of the European Under-21 Championships in Israel, defeating England in the process.