Many people had questioned if it would ever happen and I was starting to wonder what would come first, the end of the world or QPR’s first win of the season. With 21st December fast approaching it was looking like a touch and go affair. Yet this weekend proved that miracles do happen, and Queens Park Rangers managed to win a Premier League game at long last, due to Adel Taarabt.

The 2-1 victory over their local rivals Fulham was long overdue and achieved thanks to a mercurial performance from their eccentric and unpredictable playmaker Adel Taarabt, who scored the two crucial goals. His display led to Harry Redknapp saying it was “one of the all-time greats”, before the new QPR manager compared Taarabt to a familiar face: Paulo Di Canio. Consequently, I thought I’d delve into the topic of aces in the pack that have saved relegation threatened teams.

It’s a well known paradigm that the players that are required to get a team out of trouble are predominantly the honest, hard working men of steel that will run through brick walls for the team. After all, a relegation battle is a war zone, and no place for your average stroppy, terribly inconsistent fluorescent footed winger. Consequently, players like Junior Hoillet and Esteban Granero have been pushed out of the QPR team by Redknapp and have been replaced by the likes of Clint Hill, Shaun Derry and Jamie Mackie. Yet, teams like QPR that desperately need wins invariably need a match winner, and Adel Taarabt is far more likely to be one than Ryan Nelsen is, with all due respect. I’ve even given Taarabt the ultimate vote of confidence, by putting him in my Fantasy Football team.

Over the years, some teams have relied heavily upon their talismanic flair players to get them out of trouble. For instance, how many years would Southampton have stayed up for in the 1990s without Matthew Le Tissier? Instead, they’d have had to have relied on the likes of Chris Marsden, Francis Benali and Ali Dia to dig them out of trouble.

As much as I dislike him as a pundit, Le Tiss worked wonders for the Saints, providing the goals to ensure at least a 17th place finish year on year. Ironically perhaps, it wasn’t until a certain Harry Redknapp took over in 2005 their Premier League spell finally ended. Needless to say, Le Tissier had long since retired and piled on the pounds sitting next to Jeff and Co on the Soccer Saturday panel.

The aforementioned Paulo Di Canio may not have been West Ham’s saviour as they were a mid-table club for most of his time at Upton Park, but he still brought an unpredictability to the Hammers’ front line that made them a far greater threat than if they just had two honest, hard working target men up top. Although it all ended up in tears (literally) at St Andrew’s in 2003 as despite Paulo’s brace in a 2-2 last day draw, West Ham were relegated and Di Canio blubbed his way off the pitch. 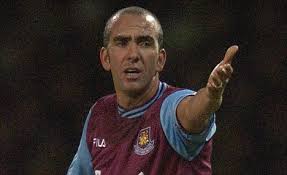 Other players who played a similar role include Muzzy Izzet for Leicester in the early 2000s; World Cup winner Christophe Dugarry who came in to save Birmingham City in 2002-03; Andres D’Allesandro (again for Redknapp) who masterminded Portsmouth’s survival bid in 2005-06; and (dare-I-mention?) Carlos Tevez for West Ham in 2006-07?

The list doesn’t end there, think Geovanni (Hull City 2008-09); Jay-Jay Okocha (Bolton Wanderers 2002-03); Jurgen Klinsmann (Tottenham Hotspur 1997-98); Geoff Horsfield (West Bromwich Albion 2004-05?) Okay, maybe the last one is debatable, but there’s no denying that a flair player at the top of his game can add an extra dimension and a greater chance of salvation in a survival bid.

What makes these players so special is their unpredictability. Sure, this can often backfire as they also often bring a lot of baggage. As well as that unpredictability is the chance things can go horribly wrong. A lot of the players I’ve mentioned (and Taarabt being one of them) have a large ego and a tendency to sulk if things don’t go their way. These aren’t ideal characteristics for what is such an emotionally challenging task which is bound to lead to some disappointing moments, but as my examples have shown, sometimes it’s worth the risk, simply because of their technical ability and potential capacity to win games on their own from nothing.

Of course, the risk I mentioned means this ploy doesn’t always work. Bradford City for instance in 2000/01 placed a lot of faith (a reported £40k per week) in Aston Villa misfit Benito Carbone (right) in the hope he’d do for them what his former Sheffield Wednesday teammate Paulo Di Canio did for West Ham. Others, such as Stan Collymore, were also brought in to join him at Valley Parade but it wasn’t enough, possibly the amount of egos had a negative effect on their performances. The combination of big wages and relegation crippled Bradford and they’re now in League Two, it didn’t stop them beating Arsenal in midweek though.

In 2008-09 Newcastle United had more technically gifted players than you could shake a stick at, including Damien Duff, Obafemi Martins and a certain Charles N’Zogbia (whatever happened to him?) but some clueless boardroom decisions and dodgy managers led to an 18th place finish. Middlesborough too went down that season after investing a hefty £12 million on Brazilian flop Afonso Alves, who was far from prolific at Boro to put it nicely.

Equally, in 2007-08, Derby County went down after deciding that Robbie Savage was to be the flair player that would save them from the dreaded drop…

As you can imagine, no article referring to relegation could be complete without a mention of Wigan Athletic. Over the years, I can’t really name a Latics player (in the Premier League era anyway) who would fall into this category. I tried to make an argument for Julius Agahowa, but I felt it just lacked a little conviction.

Generally, we’ve managed to stay up due to our team spirit, there haven’t been any ‘superstars’ as such that have kept us up on their own. The likes of Jimmy Bullard, Paul Scharner, Emile Heskey, Lee Cattermole and co were brilliant in keeping us up and were key players but none of them really fall into the category of unpredictable flair players. We tried that with the likes of Jason Koumas and Olivier Kapo and their Latics careers didn’t quite go to plan, did they?

Looking at this season’s bunch I don’t see many that stand out as fitting the criteria I mention above. Jordi Gomez maybe?

Let’s just hope this Roger Espinoza guy can prove to be our saviour, otherwise we may end up with a Stan Collymore or even worse, an Ali Dia.