Scharner is spooked by Whelan dream 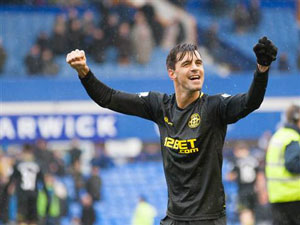 As Paul Scharner carried out his post-match interview, Chairman Dave Whelan joined him to share a dream he had last week, one which would see Latics face his former club Blackburn Rovers in the semi-final of the FA Cup at Wembley.

A day later the draw was made and should our fellow Lancashiremen get past Millwall on Wednesday, the story will be half way there.

“I jumped out of my chair and couldn’t believe what I was watching,” said the 32-year-old.

“I was sitting in front of the TV watching the draw and thought oh my god the Chairman’s dream is almost coming true.

“He said to me after the game that he had a dream of playing Blackburn in the semi-final and I just can’t believe how the draw turned out.”

After Saturday’s success against Everton, Latics will now face the winner of the quarter final replay between Millwall and Blackburn, opponents that Scharner believes will not be underestimated.

“We cannot drop any focus when we play against either Millwall or Blackburn.

“We’ve been performing really well and we need to make sure that the way we played against Huddersfield and Everton is topped off by a performance worthy of getting to the final.

“Of course the draw is good for us but it will be a one off game and both of those two teams will be looking to do what we did against Everton.

“Whoever we face it will be a very tough game because they wouldn’t be at this stage if they didn’t deserve it.”

With Latics potentially as much as 120 minutes away from a place in Europe next season, Scharner asked the question:

“We started history at Goodison and why should that end now?”

“It’s an absolutely brilliant opportunity for every single player in the dressing room to get that feeling of achieving something really big.

“Winning the trophy would mean straight qualification for the Europa League and why can’t we dream that big?”

Not getting carried away with the FA Cup, Scharner remains focussed on his primary aims.

“My view on my situation is that I’m extremely grateful and happier than ever before to be given 90 minutes and I am enjoying every single game I play.

“I’m just looking forward to every game that I get the chance to play in from now until the end of the season and I can’t thank the gaffer enough for giving me the opportunity.

“My dream at the moment it to keep trying my best and we have to make sure we stay in the Premier League as well as having this amazing cup run.”

Scharner described the three quick fire goals that sealed the 3-0 victory as “the craziest three and a half minutes I’ve ever had in my career.”

And for a friend of the Austrian it was a crazy three minutes as well.

“I’ve got a friend who is an Everton supporter and he had to work during the game delivering a parcel,” said Scharner.

“He got out of his van for five minutes to deliver this parcel and it was 0-0.

“He came back sat down in his car and it was 3-0 and he couldn’t believe what he was hearing.”

Back at Goodison Park and on the pitch it was a different reaction.

“On the pitch we were just celebrating, we only really realised what we had done at half time,” added the defender.

“We were thinking wow, we’ve got another 45 minutes to play and anything could happen in this game.

“It could have gone the other way round in the second half and I’m very pleased with how focused we stayed in the game.

“There were one or two chances in the second half but we made sure we kept the clean sheet which is a good sign of how well we played.”

With emotions running high at the end of the game, Scharner went to a place he says he loves.

“After every game I go to the fans and say thank you for their amazing support.

“The supporters need a connection with the players and for me it is just one of those things that is crystal clear.