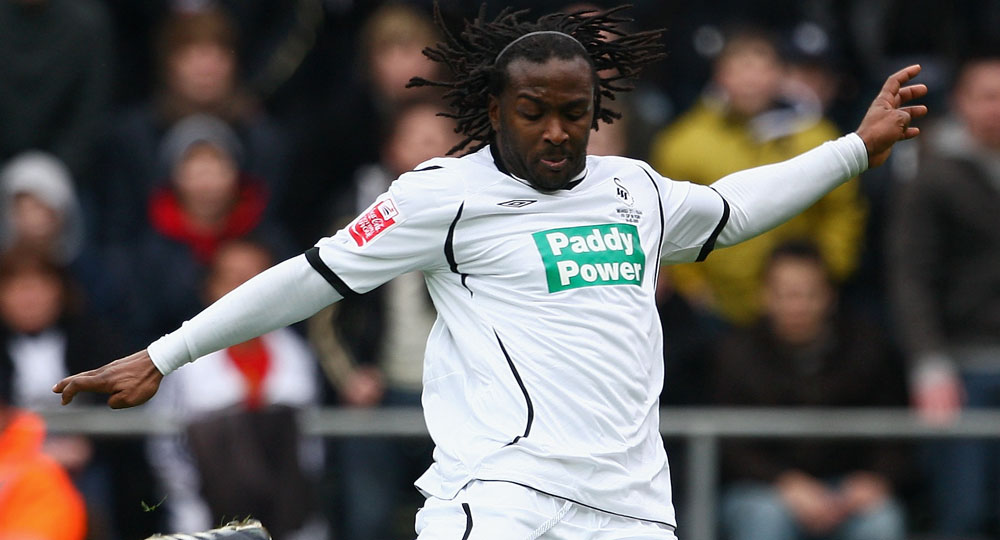 Jason Scotland is looking like the strong favourite to be the next player to sign for Latics under new (and old) manager Roberto Martinez. The player would follow in the wake of Jordi Gomez, who although wasn’t a Swansea player, did seem to get the locals a bit upset when he came here.

Swansea striker Jason Scotland looks set to for a reunion with former manager Roberto Martinez as he weighs up a move to the DW Stadium.

After constant speculation in recent weeks, Martinez has finally made his move to take the highly-rated Trinidad and Tobago international to Latics. Huw Jenkins, the Swansea chairman has come out and said Swansea will consider all their options over the next 48 hours.

Scotland though is keen to test himself in the Premiership and as Wigan is his preferred destination, it seems almost certain last season’s 24-goal hitman will be here sometime soon. Swansea may yet haggle over his price, but Jenkins is almost resigned to losing the 30-year-old.

“We have always said we won’t be bullied into letting our players go,” he said. “But I suppose, as things stand, it’s very difficult to see Jason staying. Ultimately, he is still contracted to Swansea City though.

“And we have always said our players will only leave when the deal is right for us. We have received a formal offer from Wigan for Jason. We will consider the contents of the offer and respond accordingly within the next few days.

“We will speak to Wigan and talk things through. I won’t give any indication of the fee, but I can say it is worth considering.”

With more than 50 goals in just two years, including a Golden Boot in League One and a joint second finish in the Championship’s scoring charts last year, the experienced frontman has all the credentials to well in the Premier League.

Along with Jordi Gomez, who signed for us earlier in the summer after his season-long loan from Espanyol to Swansea had finished, Scotland was practically the sole source of goals as the Swans secured an eighth-place finish in the Championship. Swansea signed the striker for £25,000 from St. Johnston and are rumoured to be asking around £2m if we want to sign him.