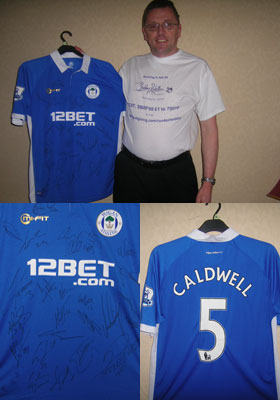 Cancer affects so many people, not just those diagnosed with it. Wigan Athletic were the only Premier League Club that sent Toon fan Stephen Turnbull anything when he started his fund raising off and he is hoping some Latics fans may want to bid for it.

Stephen Turnbull is dedicating a lot of his time over the close season to raise awareness and money for the Sir Bobby Robson Foundation. Apart from his challenge to run from Whitehaven to Tynemouth, he has acquired a fully signed shirt to auction off.
Firstly the Challenge: On June 27th Stephen will start his unaided run from Whitehaven to Tynemouth (Coast to Coast) which he has measured at 123 miles, more if he gets lost.

Wednesday June 27th – Whitehaven to Keswick
Thursday June 28th – Keswick to Penrith
Friday June 29th – Penrith to Alston (over Hartside which is some 1904ft above sea level.
Saturday June 30th – Alston to Hexham
Sunday July 1st – Hexham to Tynemouth….some 36 miles which is a great way to spend my birthday.

The Cause – The Sir Bobby Robson Foundation (www.sirbobbyrobsonfoundation.org.uk)
Sir Bobby fought cancer an incredible 5 times and set up the foundation to continue the fight. SBRF looks to trial new drugs and early detection of cancer – basically trying to provide an answer to cancer.

Stephen say’s “some 250,000 people will be diagnosed with cancer this year with more than 50% not making another 5 years. Clearly it has a devastating effect on people – not just those diagnosed – and it does not discriminate. I have lost family and friends to Cancer so it is something very close to my heart.

“I also help run an Under 11 football team (Hexham Greens), have my FA Level 1 coaching badge so football is a passion of mine as well. With Sir Bobby being such an inspirational person to me, even after his passing it is easy to see why I want to do the challenge and hopefully raise a lot of money for the cause. However, the support given goes much further than the donation.

“People can donate via the Just Giving page, www.justgiving.com/run4sirbobby or text: SBRF £5 to 70070 – changing the amount where applicable. All expenses for the challenge are being paid by me personally which will also include the postage to the winning bidder. So all of the donations will go to the foundation.

“Back to the shirt, it is No 5 – Caldwell and has been signed by the players most of whose signatures you can identify by their squad numbers. The shirt will be posted out to the winner at my expense and the winning bid to be donated via the justgiving page. To bid please go to this web site, click here

Whilst I support Newcastle who is having a season that can be described as unexpected ideally we win our remaining games and Wigan do enough to stay in the Premier League. The Premier league needs teams like Wigan”