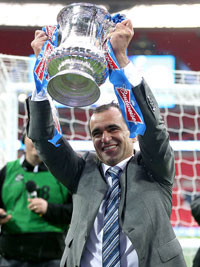 Captain Gary Caldwell is hoping that Roberto Martinez will still be around next season as the club prepare to bounce straight back to the Premier League.

Martinez, 39, has been heavily linked with Everton following the departure of David Moyes and the sacking of Tony Pulis at Stoke City and the imminent departure of Manuel Pellegrini from Spanish La Liga side Malaga have also had the rumour mill running at full speed.

Speaking to the Wigan Evening Post Caldwell spoke of his desire to continue under Martinez’ stewardship: “Everyone wants to be here next year, and obviously the gaffer is at the head of everything we do here.

“A lot of other clubs will be wanting to take him and rightly so. But obviously we all want him to stay here and help us to get back into the Premier League as quickly as possible.

“It’s his decision, and it will be a big decision to make. Whatever he decides we’ll wish him well, but on behalf of the players here we’re desperate for him to stay.”

Martinez was in the headlines last year when Liverpool came knocking on the door following the departure of Kenny Dalgish but he decided that his future lay with Wigan.

That came 12 months after turning down the chance to discuss a possible move to Villa Park.

Fans of Wigan Athletic are now waiting with baited breath to hear whether or not the popular Spaniard decides to continue his tenure at the DW Stadium or that his future would be better off with another club.

Whether or not he decides the time is now right to move on we should be finding out soon with Martinez due to sit down today with chairman Dave Whelan to hopefully give his decision one way or the other.